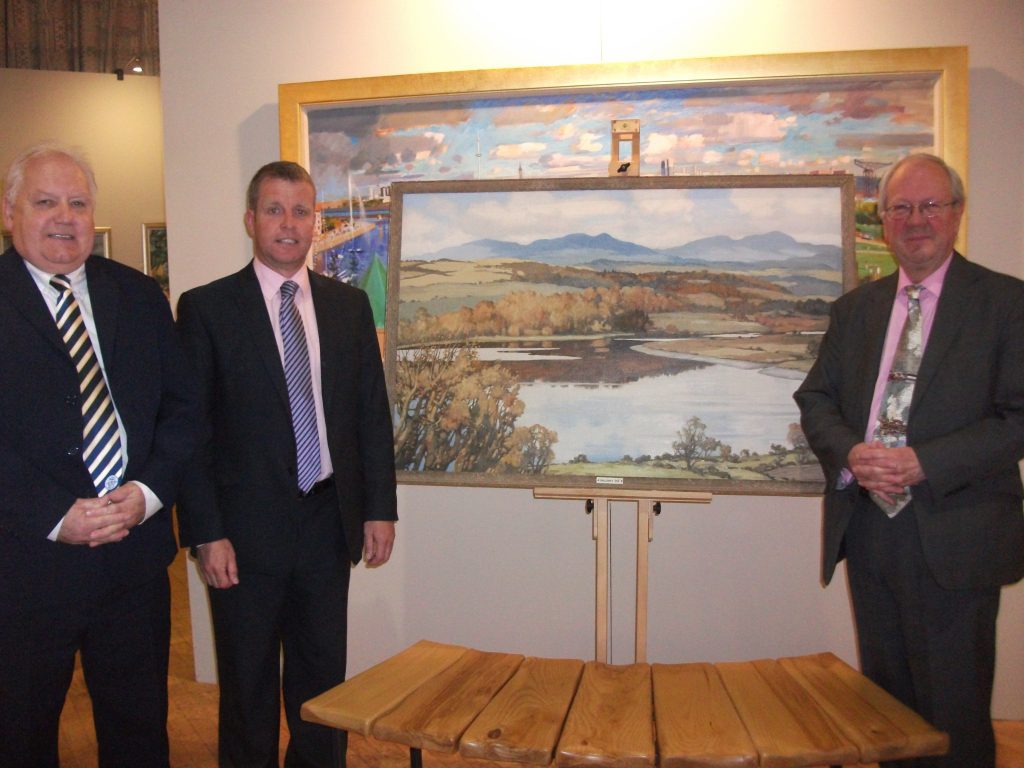 In 2014 Railway Heritage Designation Advisory Board contacted The Stewartry Museum with a proposition; if you can arrange the transport from The Science Museum in London we can give you a Charles Oppenheimer painting to be preserved in your collection; and not just any Oppenheimer, the original work used in the production of a nationwide railway marketing campaign in the 1950s. The museum leaped at the chance to acquire such an important and historical work.

On 31st July 2015 Richard, Lord Faulkner of Worcester, as representative of the Railway Heritage Designation Advisory Board, officially presented the work to Cllr Tom McAughtrie, Chair of the

CCS committee. The backdrop for this presentation was the Kirkcudbright Town Hall where the excellent ‘Airdrie Boys’ exhibition is currently on display.
The evening began with an introduction by the Chair of the Stewartry Area Committee, Cllr Finlay Carson, followed by a speech by Cllr McAughtrie in which he noted Kirkcudbright’s strong history of links with national artists and the council’s commitment to continuing to celebrate the town’s heritage of art and craft.
Lord Faulkner stepped to the fore and explained that the Railway Heritage Designation Advisory Board was in charge of designating of a range of objects, from railway engines to archives, to be preserved for future generations in museums across the country.

He said;
“This is in perpetuity, and for everyone to enjoy. I and the board are very pleased to designate this painting to Dumfries and Galloway Council’s Stewartry collection”
Finally Lord Faulkner unveiled the oil painting ‘The Galloway Dee’ to appreciative murmurs from the assembled audience. The audience was also able to view an original poster, which had been in hundreds of railway stations around the county in the 1950s, also in the Stewartry Museum collection. Lord Faulkner commented on how unusual it was to have both the original art work and an original poster in one collection.
Councillor Tom McAughtrie, Chair of the Council’s Community and Customer Services Committee said;
“This is a major coup for Dumfries and Galloway Council. To have a painting of this significance in our collection is wonderful news. The Stewartry Collection is proving to be very popular with locals and visitors alike. I would encourage as many people as possible to get along to The Stewartry Museum and have a browse of the paintings on show.”
The presentation was followed by an entertaining and informative talk on the artist Charles Oppenheimer by Euan Robson. The illustrated talk was fascinating; placing the works on display in context and proving Oppenheimer’s valuable place in Kirkcudbright’s history and the history of Scottish Art.
Lord Faulkner was presented with a copy of Euan Robson’s book Charles Oppenheimer – From Craftsman to Artist.
The evening was attended by representatives of the Kirkcudbright community, the Railway Heritage Designation advisory Board and Dumfries and Galloway Council.
The painting ‘The Galloway Dee’ is currently on display in The Stewartry Museum.