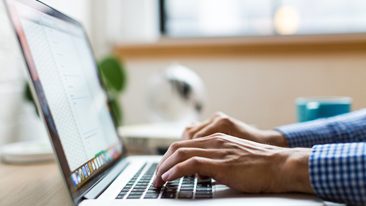 The first ever report specifically focused on the digital position of South of Scotland businesses has been published.

Commissioned by South of Scotland Enterprise (SOSE) alongside a range of partners including the Scottish Government, Highlands and Islands Enterprise, Scottish Enterprise and Skills Development Scotland, the Digital Economic Business Survey (DEBS) aims to provide an understanding of the level of digitisation of Scotland’s businesses.

Previous DEBS were undertaken in 2014 and 2017 for Scotland but this is the first time the report has included such a focus on the South of Scotland.

Over 600 businesses in the South of Scotland were interviewed as part of the DEBS, with businesses recognising the positive impact digital technologies have on creating a thriving digital and NetZero economy.

Some of the key findings included:

Engagement and uptake of digital technology

Challenges highlighted by DEBS in the South of Scotland included a need to help the region’s businesses improve their digital skills and the importance of cyber security.

Supporting businesses to adopt and benefit from digital technologies is key priority for SOSE, highlighted by the variety of activities the economic and community development agency is currently taking forward including a South of Scotland Digital Strategy and bold ambitions for the region.

These activities include SOSE’s role as key partner in the launch of Scotland’s first rural 5G Hub in Dumfries, the sponsorship of two CivTech Challenges within the South and co-hosting a series of digital focussed webinars with the Scottish Government, including an Introducing 5G event in September.

“For the first time, the Digital Economic Business Survey has provided specific focus on the South of Scotland which will allow SOSE and partners to have a better understanding of the opportunities and challenges businesses face in our region.

“DEBS also shows us the ambitions of South of Scotland businesses, and their adaptability during the COVID-19 pandemic. It is vital we harness this ambition to build a thriving digital and NetZero economy.

The South of Scotland DEBS is available at www.southofscotlandenterprise.com/debs

The DEBS reports from 2014 and 2017 both included interviews with South of Scotland businesses but this year SOSE commissioned additional reporting specific to the South.