Abbey Cottage Tearoom in New Abbey has been serving tasty home cooking since it first opened its doors in 1983. Its location, overlooking the romantic ruins of Sweetheart Abbey, has made it a popular place to visit and its delicious home cooking and baking have tempted many to return again and again.

The Tearoom has earned many accolades and awards over the years and the cooking always attracts special praise.

Now, at last, Morag McKie and her daughter Jacqui Wilson have collected some of their favourite recipes and have published a book. There are old family recipes handed down through generations, and others which came to the Abbey Cottage kitchen from friends. Some dishes have featured in Jacqui’s baking column in the Daily Record, all have been popular choices on the Abbey Cottage menu.

The Abbey Cottage Home & Hearty Cookbook will delight anyone who loves the taste of homely cooking and the food traditions of Dumfries and Galloway.

The 80 page book has been designed by Dumfries-based weesleekit, and has specially commissioned illustrations by Val Macadam, who lives in Kirkbean. The book is available to buy at Abbey Cottage Tearoom and online at www.abbeycottagetearoom.com. At £7.50 it makes an ideal Christmas present. 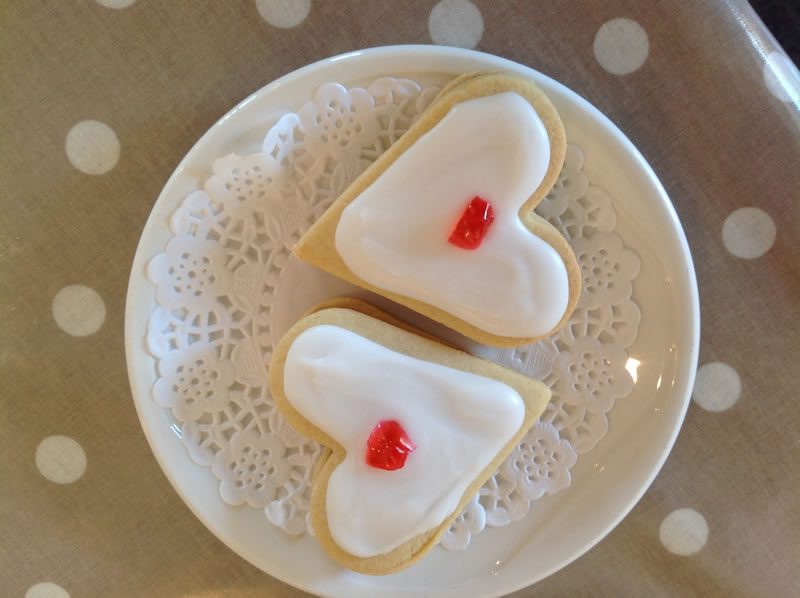 – Pre heat the oven to 160ºC. Lightly grease 2 baking sheets.
– Cream the butter and sugar together by hand, or using a food mixer. Then add the egg and the flour. A firm dough will be formed.
– Roll out the dough onto a floured board to approx 0.5 cm, then cut an even number of matching biscuits. We use a heart shaped cutter for our Sweetheart Empires, but you can choose any shape! After cutting, gather up the odd bits of dough, and roll out again to get more shapes.
– Place the shapes carefully onto the baking sheets and bake in the oven for 15-20 mins. Check the biscuits, and if they are browning, turn the oven down. You want them baked, but not browned!
– Remove from the oven and place on a wire tray to cool. Once cooled, assemble with a filling of raspberry jam between the biscuits, and top with icing and a chopped glacé cherry.