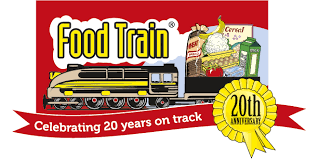 On the 23rd September 2015,  Food Train commemorated their 20th anniversary by hosting a celebratory party in the Mitchell Library, Glasgow. To mark this milestone in the history of Food Train, past and present customers, volunteers and staff the charity created feature a film of the story so Far, including a birthday message from their longest serving customer Mrs Wilkinson. The film gives an insight into the history and the story of Food Train so far! A huge thank you goes to Chris and Stuart for directing, editing and to Danielle for being a fantastic presenter. With special thanks to Matthew Conn for doing the background music and sound editing .
Founded in 1995 by older people for older people following a community survey in North West Dumfries Food Train’s vision was to bring universal food access to any older person in need regardless of means or health testing to help them eat well, live well and age well. Food Train Founder Jean Mundell MBE devoted the last 14 years of her life to Food Train, from the original community survey in 1992 which led to Food Train’s launch, working tirelessly maintaining and promoting the Charity till her death in 2006. Customer Mrs Violet Wilkinson (joined 1997) is Food Train’s longest serving member. Local volunteers have been delivering her groceries for over 18 years. She says “I think Food Train is a wonderful thing”. Customer Mrs Halliday (joined in 1998) recalls writing an article featured in the local press in 1995, talking about how useful getting food delivered was.
The simplicity and value of the Food Train proved so popular in Dumfries, funding was provided in 2002 by Dumfries & Galloway Council Better Neighbourhood Services Fund to help with expansion across the region. This was to ignite national expansion across Scotland, now benefitting over 1850 older people with regular and reliable food access.
Since launching on the 29th June 1995 when the very first Food Train grocery deliveries were made to 5 customers in Dumfries totalling £116.24. Since the very first day, Food Train’s fantastic volunteers have made 228,000 grocery deliveries, shopped £6.77 million of groceries and given 631,000 precious hours of volunteering, all benefiting older people in need across Scotland. Everyone connected to Food Train is looking forward to the event and staying on track for the next 20 years and beyond.

Find out more about Food Train on their website at http://www.thefoodtrain.co.uk/