New Generation Of Doctors Complete Their Studies In Dumfries & Galloway 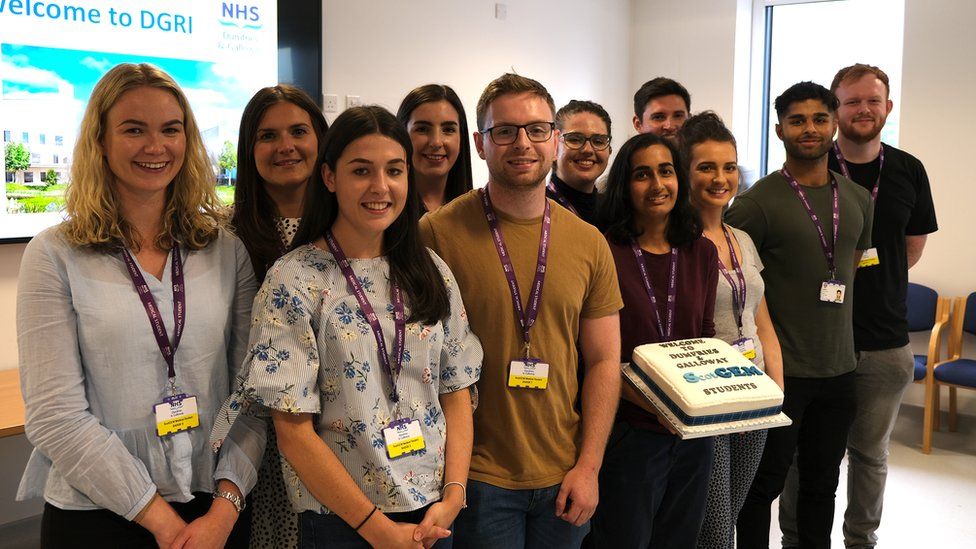 A GROUND-BREAKING programme to create a new generation of doctors has seen its first students complete their three years of study within Dumfries and Galloway.

COVID-19 has added to the challenge, but the ScotGEM programme has supported 54 graduates with a range of different first degrees to pursue a career as a generalist practitioner within NHS Scotland.

ScotGEM offers graduates the opportunity to gain a medical degree in four years. It is is particularly focussed on preparing doctors to work in rural areas of Scotland. The course launched in 2018, and after the students’ initial year of university-based study NHS Dumfries and Galloway welcomed its first intake in 2019.

Dr Fiona Graham is Director of Medical Education with responsibility for the Scottish Graduate Entry Medicine (ScotGEM) MBChB course, and she said: “We are absolutely delighted that the first group of ScotGEM students are nearing graduation.

“ Students come to us in their 2nd, 3rd and 4th years and, to date, we have taught 153 students. We are excited that a significant number of this year’s graduates are coming to join us as Foundation doctors in August and, of course, who hope they will stay and establish their career here in Dumfries and Galloway.”

Co-ordination of studies was delivered out of The Education Centre at Dumfries and Galloway Royal Infirmary, and with a large number of local GPs serving as tutors to help train the new generation.

Dr Richard Voysey from Dumfries is one of those tutors, and he said: “We’re in an immensely happy situation in that three years ago we welcomed the first students from the ScotGEM programme into the area, and we’ve now reached the point where they are now coming out for graduation.

“So it’s a hugely exciting time for them, and it’s actually a very proud moment for us.

“It’s obviously been a challenge with COVID, but actually it’s something that’s been met. So we’ve adapted teaching, and I think it’s something that’s actually worked exceptionally well. We’re immensely proud of the students. I think what they’ve achieved in really quite a short period of time is absolutely astonishing.

He added: “I think with this culture there’s very much a feeling of family of excellence and of community, and I can’t wait to see them take that forward into their careers, into their communities.

“We’re reporting this as sort of a conclusion of the story but actually it’s just the beginning of the adventure for them.”

Dr Sara Proudfoot is a GP from Annan and also a tutor on the course.

Dr Proudfood said: “I think it’s such a different course to other medical curriculums and i think that’s really stood in good stead during the pandemic.”

She added: “We’re really proud of all the hard working commitments the students have shown over the past four years and really proud of what good doctors they have become, and we’re also really excited that so many of them want to come and join us in Dumfries and Galloway at the start of their medical career.”

Abbey King from Dumfries was one of the first intake of students in the ScotGEM course, coming from a Masters degree in Biochemistry.

She will now remain within Dumfries and Galloway to complete her two Foundation Years training as a doctor.

Abbey said: “Prior to joining the course, when I heard about the course itself it was something that really excited me and enthused me, and the concepts that the course was looking to promote was something I was really interested in.

“And certainly over the last four years I’ve had the privilege of many different opportunities and I’ve received a lot of support from Dumfries as a faculty to allow me to flourish and develop.

“The course has certainly surpassed my expectations, and being honest it was something that was new and quite unknown and certainly they’ve fulfilled all of the things that they promised at the outset.

“Certainly the teaching that we’ve received from the clinicians locally has been second to none and it’s been a really tailored experience that all of us who have visited the region have received.

“I’ve just accepted my post to do my Foundation Years here, and so over the next two years I’ll be in the region as a junior doctor.”

Praising the ScotGEM course, and in particular her experiences training to become a doctor within Dumfries and Galloway, Abbey added: “I think certainly if you’re thinking about medicine and you have just come through from another degree then certainly do think about doing it as it’s been really rewarding, and medicine as a career is very wide and varied.”