In April/May 2019 almost a year before Coronavirus changed our lives, Dumfries based youth film club Scene1Take1 started making a short film based on a story about a Pandemic hitting our region. 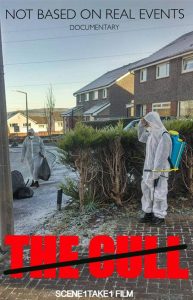 Lee Vann-Wakelin from Scene1take1 told DGWGO Entertainment news ” The group said no to a Zombie movie, no to other genres and eventually settled on a Pandemic movie. Local music festival ‘Youth Beatz 2019’ was used fairly quickly for one of the key scenes to show multiple people catching a deadly virus.

Filming was also done on location near Newton Stewart, in Georgetown (Dumfries), near New Abbey and even in December at a frost covered street in Calside.
It was a somewhat epic task, and the effort of the eleven 8 to 16 year olds to write, produce, film and for some star in the film was a huge commitment. However, come early January 2020, the news started to be washed with the deadly virus in China, then in February it started to transfer to other countries across the world and the club, whilst still filming segments and recording voice overs and sound effects, were watching these events and starting to feel uncomfortable.
By mid March 2020 the film was about 80% complete and we had engaged with some local musicians to make us a soundtrack. BUT, it was too late, the lockdown came in, and the group realised that realising the film after the lockdown would look like they had copied the event, rather then being ahead of it. So to salvage what we could a documentary was made, with the club recording their views individually and explaining the films story.
The product ‘Not Based On Real Events’ is a 36 minute documentary, which has been chosen to be shown at the start of this years Scottish Youth Film Festival, an Edinburgh based festival, which usually would be held in cinemas/theatres but this year is all online. the film has also been entered into three more festivals, with more added each week.
It will be available to watch live via zoom, which will be released on the clubs Facebook page https://www.facebook.com/Scene-1-Take-1-149470221419 so please watch out for updates.

After Fridays live showing at 6.30 on Zoom, it will be released onto YouTube for all to see.