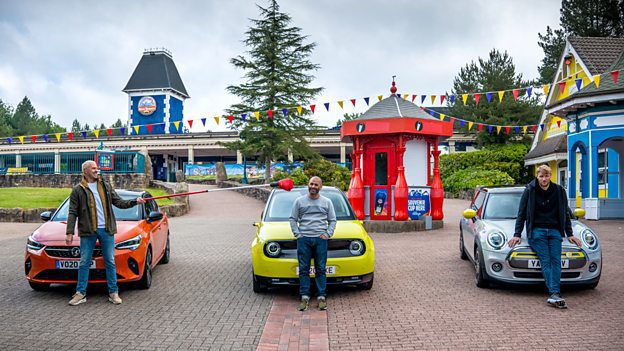 And Paddy came up with an unusual method to ensure the trio maintained social distancing guidelines when they were not in their respective vehicles – a two-metre stick with a red boxing glove on one end.

The presenters had to navigate a Honda e, Mini Electric and Vauxhall Corsa-e around a specially constructed Top Gear maze spanning the 550-acre theme park and found themselves hurtling by rollercoasters such as Oblivion and Nemesis.

Presenter, Paddy McGuinness, says: “I’ve always dreamed of having a theme park to myself for the day although these aren’t necessarily the circumstances I’d have chosen. Mustn’t grumble though, it’s great to get the gang back together after lockdown and we’re raring to go – two-metres apart at all times of course!”

Clare Pizey, Top Gear’s Executive Producer, comments: “We are so pleased to be able to start filming again and a deserted theme park is a great place to start. If what we’ve shot so far is anything to go by, social distancing doesn’t get in the way of Paddy, Freddy and Chris having a brilliant time and causing mayhem along the way.”

Following the success of the first two series with the new trio, it was announced that Top Gear’s next series will be moving to BBC One. It will debut on the channel later this year.