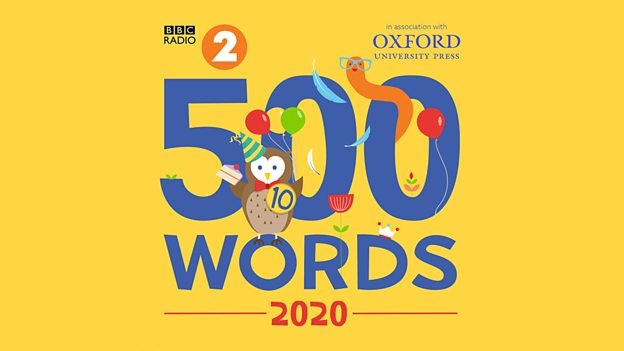 BBC Radio 2 Breakfast Show and Chris Evans’ 500 Words competition reveals that ‘coronavirus’ is the 2020 Oxford Children’s Word Of The Year.

The Oxford Children’s Word Of The Year is announced ahead of the 500 Words Final. The final will be broadcast live on BBC Radio 2’s Zoe Ball Breakfast Show on Friday 12 June 2020, with the winning stories read by celebrities including David Walliams, Dua Lipa, Joanna Lumley, Jodie Whittaker and Mwaka Mudenda.

Along with competition winners, special guests will include 500 Words judges Frank Cottrell-Boyce, Malorie Blackman, Francesca Simon and Charlie Higson, and honorary judge Her Royal Highness The Duchess of Cornwall.

There is an apocalyptic feel to many of the entries in this year’s BBC Radio 2 Breakfast Show’s 500 Words story-writing competition, which is run in partnership with Oxford University Press.

The devastating impact of coronavirus, the terrible bush fires in Australia and ongoing fears of the effects of climate change show that Britain’s children are very much in touch with the most pressing issues of our time and respond to them with sensitivity, compassion and a desire to find positive, practical solutions.

From the 134,709 entries, analysis by lexicographers at Oxford University Press has revealed fascinating data and discoveries about how children use language to express themselves.

This is the 10th anniversary of 500 Words. The competition was originally created by Chris Evans for the Radio 2 Breakfast Show in 2011 and has now received over one million entries, generating more than 440 million words.

Zoe Ball, Radio 2 Breakfast show presenter, says: “The OUP’s analysis is so fascinating. Revealing, to no surprise, that kids are so aware of everything that’s going on in the world around them and then are able to turn it into the most brilliant, engaging and imaginative stories!”

Previous Children’s Word Of The Year include Brexit (2019), plastic (2018), Trump (2017), and refugee (2016), indicating the influence of global affairs on children’s creativity. Standing out this year was the first appearance of the word coronavirus and associated names or words, such as Covid-19 and Wuhan.

Coronavirus was used 459 times in 2020, with words associated with the pandemic also increasing in frequency, including NHS, virus, antibodies, epidemic, and lockdown. Boys and girls wrote almost equally on the topic; however, the subject of the unfolding coronavirus pandemic was more widely covered in older children’s writing (10-13 years).

In many stories, the word is specifically associated with China. Given that the closing date of the 500 Words competition was 27 February 2020 (coincidentally, the day before the first case of transmission within the UK was documented), this can be understood on the basis that news stories had been reporting on the rapidly emerging crisis in the city of Wuhan and later across China.

Many narratives contained realistic physiological and medical details associated with the coronavirus:

“The nurses came running over. I felt a pain in my neck, I started to gasp for air. My body started shaking I couldn’t control myself. My eyes rolled to the back of my head, a mask covered my mouth, my heart rate dropped, my temperature raised and I have the corona virus.” (The Ex, girl 13)

On the other hand, the young writers also show a delightful blend of humour, fantasy, and creativity as they write about searching for cures and dive into science fiction. A boy of 10 writes about a getting a blue magic potion from The Smurfs, while a girl of eight writes: “That night I had an interesting dream, a magical sparkling unicorn came and whispered to me the secret ingredients of the cure for the Coronavirus.” (The Magical Cure).

In Microbial Madness (from a girl of 12), salmonella, flu and Legionnaire’s disease join forces against coronavirus; while we have a triumphant diary entry which finds the cure on Day 2,370:

“The cure was successful, we did it. We are putting every penny of our funding into distributing the cure. We will use drones to spray droplets of the liquefied version of the cure. Well, I guess I have no more time to write, I have a planet to cure!” (Inside The Life Of A Coronavirus Doctor, – boy, 11)

Children’s concern for the environment has been growing since plastic was the Children’s Word Of The Year in 2018. Indeed, mention of this word has increased by 32 percent year on year (2019 – 20), while phrases such as global warming, save the planet, and climate change jumped in use; by 126 percent, 156 percent, and a staggering 839 percent respectively.

In light of this, it is perhaps unsurprising that Greta Thunberg has seen her appearance in stories increase 1,755 percent on last year. In one wonderful, feminist mash-up – notably written by an 11 year-old boy – she is working with three other iconic women to bring about political and societal change:

“The P.O.W (Protectors Of Women) Brigade were having a meeting in their secret cellar beneath the magnificent Buckingham Palace. The head of the team Emmeline Pankhurst was leading the meeting… ‘Now down to business. Rosa Parks, Greta Thunberg and Marie Curie – I would like you three to take this one: a man in America doesn’t believe that world problems and gender inequality is happening.'” (The P.O.W Brigade)

Sharing the young activist’s anxiety across a range of issues, many stories were set in the future, imagining earth suffering catastrophic environmental damage as a result of climate change: “Earth looked like a tiny burning speck, red flames visible even from here. Her sobs became uncontrollable. Earth was finished, climate change had seen to that. Her home, family and friends were gone for good. All over, time up. The end.” (The End, girl 12)

Throughout December 2019 and January 2020, the media was filled with heartrending stories about the Australian bush fires. Responding to this, children wrote about the threat to Australian wildlife, most notably koalas and kangaroos. In such stories, the narrator often tries to save animals trapped by the fires, with many showing empathy with animals in danger, while others narrate tales through the eyes of the creatures in peril: “What caught their eyes was the poor kangaroo in front of them crying, looking at the fire rapidly moving towards her joey.” (Set alight, girl 12)

A number of stories also featured the series of storms that swept across Britain last winter, particularly Ciara and Dennis: “It was the night of the storm Ciara, the wind whistled, the thunder was as loud as seven cars falling from the sky, fences blew over, as the wind was so powerful and strong. I laid in my bed with my eyes shut as tight as possible. I could hear bins, trampolines and all sort of things falling over.” (The Silhouetted Figure, girl 10)

Technology and gaming once again featured strongly in the submissions for 2020’s competition and, as in 2019, the Xbox is the leading games console mentioned. However, other platforms have seen large rises in their inclusion in stories, which are mainly written by boys.

The games Minecraft, Fortnite, Roblox, Call Of Duty and Just Dance all experienced increased mentions, by an average of 75 percent. Albeit that Fortnite, while remaining the second most-included game in related stories, saw a fall in its use by 33 percent.

In a revealing insight that many parents will recognise, one youngster wrote vividly about being denied access to his favourite tech: “Tom was a 13 year old boy. He never did any work because he was too busy playing on Nintendo, watching TV or playing on his iPad…. He was about to grab his Nintendo when he realized that it was not there. So, he went to find the TV remote but that was not there either…. ‘Where is my technology?’ asked Tom. ‘I have taken it away until you do some science,’ answered Mum.” (Life Without Technology, boy 9)

YouTube continues to be by far the most-mentioned platform, although Instagram is beginning to rival it – increasing 99 percent in 2020. Girls write about social media far more than boys, especially older girls who also appear to be spearheading the rise of TikTok.

With almost chilling acuity, fake identities and catfishing are also brilliantly observed: “My name is Tilly. I’ve got darkish hair but on insta it will be raven black. I’ve got brown eyes, but soon they’ll sparkle like emeralds.” (Evil Instagram, girl 10)

Reflecting the use of Insta as part of creating a new portmanteau word and promoting a message about having a positive self-image, Pickle The Pig’s Story is something of a latter-day morality tale: “She looked back at her phone and realized that she posted the ugly picture of herself on Instasnort a couple of seconds ago. However, it had received a million likes and many kind comments of all types. From that day Pickle had understood that you must be yourself not what someone else said you should.”(girl 11)

Famous people, real or imagined, continue to feature strongly in many stories, as do mythological and fictional characters. Once again, Santa tops the list with 2,293 mentions, with Donald Trump continues to provide a rich source of material in second place overall and heading the list of ‘real’ people. Boris Johnson enters the list for the first time, with 278 hits. The top 25 ‘famous people’ (including fictional and mythological characters) are:

And now for something completely different

This year’s 500 Words has again demonstrated that children delight in the unusual. Whether it is creating an invented word, fun similes, or dramatic and witty story openers, there has been another feast of creativity for the judges to revel in.

Could the charming simile as cool as a crab with sunglasses on (girl 9) be set to replace the more usual and staid cucumber? Many must surely have felt as confused as a blind goldfish (boy 9), or that awkward moment in a conversation when things fall as silent as an exam hall (girl 9)?

Helen Thomas, Head of Radio 2 Content Commissioning says: “I’d like to thank OUP for their incredible work analysing this year’s 134,709 stories and building a unique Corpus of words from the entries to 500 Words. I’d also like to thank all the talented children who entered in the competition’s 10th year, as well as the teachers and judges who initially judged the entries – we could not have done it without you!”

Helen Freeman, Director, Oxford Children’s Dictionaries & Language Data at Oxford University Press says: “Once again, the analysis of the children’s writing has revealed how tuned in young people are to global events and how real-world events can inspire such a variety of stories and writing styles, from apocalyptic science fiction, to fairy tales, and humour. It’s striking that so many children are choosing to explore these themes and ideas in their writing, and it’s a complete delight for us to read their stories in this special 10th anniversary year.”