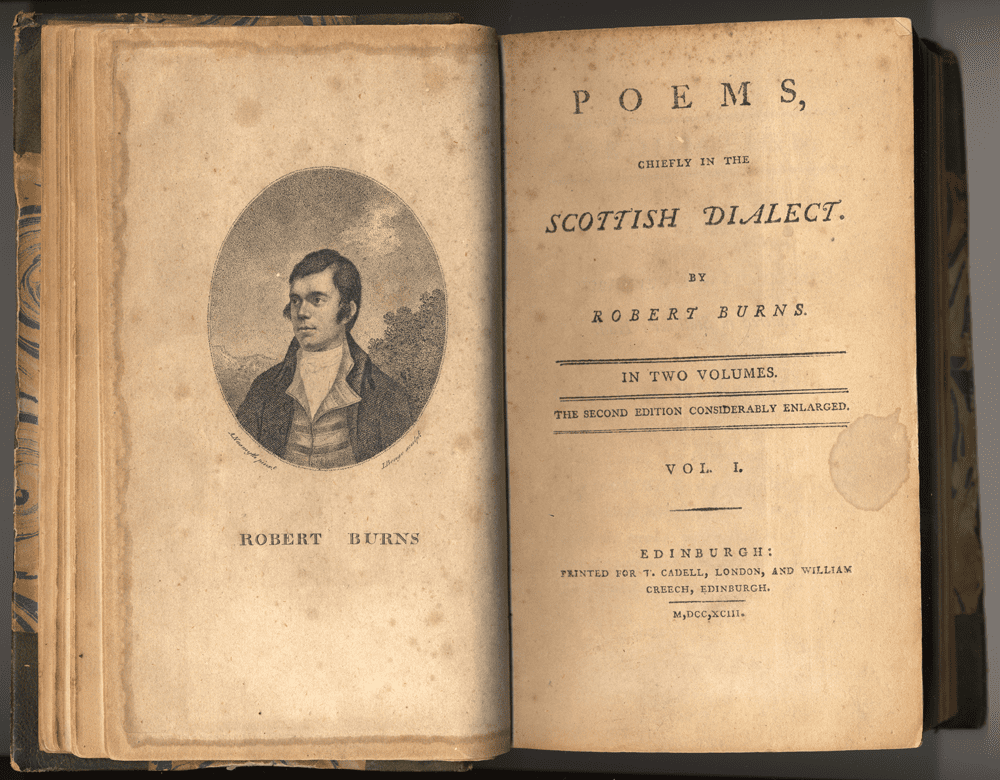 A significant permanent addition has been made to the collection at Robert Burns House, Dumfries – just in time for Burns Night. A two-volume set of poetry by Robert Burns ‘Poems, Chiefly in the Scottish Dialect’ (1793) has been transferred to the museum’s care through the Acceptance in Lieu Scheme.

Burns distributed copies of these books of poetry ‘among a few Great Folks whom I respect, & a few Little Folks whom I love.’ The volume, which is now on display in Burns House, is dedicated to one such friend, Margaret Elizabeth Fintry, the wife of Burns’ patron, Robert Graham, the 12th Laird of Fintry. Burns wrote in affectionate terms about Margaret, wishing that ‘…every child of yours…find such a FRIEND as…[I] have found in you.’ Robert Burns also praised the Grahams of Fintry for their ‘goodness to me [which] has been generous and noble.’

The dedication was probably written in the building which is now a museum called Burns House and dispatched from there to his friends ‘as a tribute of gratitude’. In it, he seems to be aware of his own mortality, ‘…this page may be read when the hand that now writes it, is mouldering in the dust’ and we now know that he died three years later.

Councillor Archie Dryburgh, Chair of Dumfries and Galloway Council’s Communities Committee commented: “We are pleased that visitors to Burns House will be able to see these volumes and the touching inscription. The house where Burns died has long been a place of pilgrimage and this latest addition will mean that visitors can read words Burns wrote about his own mortality and visit his Mausoleum nearby.”
Vice Chair of Dumfries and Galloway Council’s Communities Committee, Councillor John Campbell, said: “Burns had a lot of friends in Dumfries during his lifetime. These volumes are testament to his relationships but also show the continuing affection we feel for Burns in the town and the importance of preserving and sharing his life and work here today.”

The volumes were accepted in lieu of inheritance tax by HM Government from the Graham family. “I am delighted that, through the Acceptance in Lieu scheme, these two Burns Volumes, with such personal inscriptions, are being allocated to Dumfries and Galloway Council for display in Robert Burns House, Dumfries – a most appropriate and fitting destination” commented Edward Harley, Chairman of the Acceptance in Lieu Scheme.

Burns House is free to visit and is open Tuesday to Saturday, 10am–1pm, and 2–5pm. For more details, see: www.dgculture.co.uk