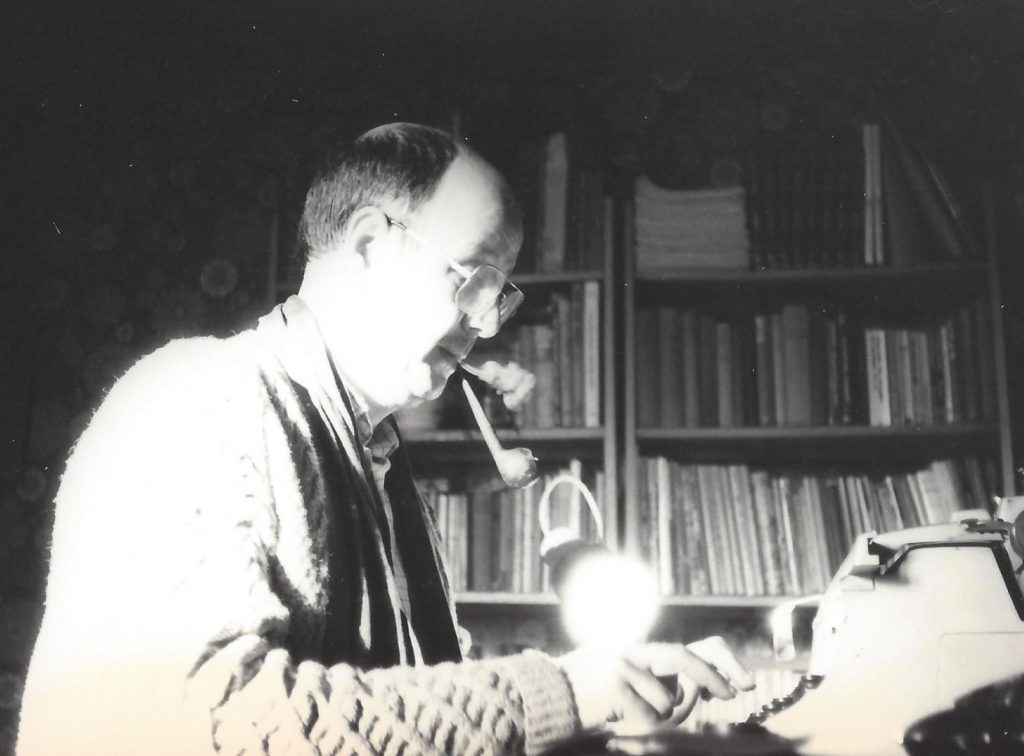 A rather special book arrived in the post yesterday. It’s by my late father, Peter A. W. Kelt, who was born in Dumfries in 1932.

It’s called Not With A Whimper and it’s a riveting Cold War thriller. How it saw the light of day is quite a story in itself.

Son of James Charles Kelt and Mabeth (nee Winton) Kelt, Dad went to Dumfries Academy, excelling in languages and sports. Golf was his passion and he contemplated turning professional, deciding instead to go to university in Edinburgh. He did geography, anthropology and psychology, and was roped into National Service on graduation. Later, as with so many Scots, he moved to England, and settled in Southport where he taught geography.

As father and daughter, we were very close, sharing a liking for dark thrillers and film noir. I started reading Raymond Chandler and Damon Runyon paperbacks from his bookshelves by the age of ten.

Family holidays were in Dumfries, and I have fond memories of Rockcliffe, Sweetheart Abbey, Gatehouse of Fleet, Kirkudbright. I’ve gone back often with my own family. As we’ve driven down the familiar roads, I can still picture my grandfather’s posh Jag, with a walnut interior, cruising along. Dad and Grandad in the front, with Granny, Mum and me in the back, suffering from the soft suspension. We swanked around rather.

Then came the 1960s and package holidays. Dad decided to be adventurous and took Mum and me off to southern Spain. The hotel was a converted bodega by the beach, and he loved the continental lifestyle – the affordable cigars, coffee and cognac, Spanish cuisine, the whole way of life.

Down the road was the US naval base, and he was fascinated by the affluence of the Americans versus the poverty of the locals. We didn’t know this at the time, but it spurred him to write his first full-length novel. It’s a dark, conspiracy thriller set in Andalusia and really captures the spirit of the place.

Years passed. Dad divorced and remarried, but died of a short illness in 1992. More years went by, and Maggie decided to retire to Dumfries and Galloway, a region that has always been close to her heart. She and her new husband moved to Dalbeattie, wonderful dog-walking woods out the back and not too far from Kipford and the harbour. Perfect. This was when she asked if I wanted my father’s manuscripts. I was a little reluctant, but I weakened.

The box arrived, and I spent months shunting it around the hallway. On my daughter’s insistence the Christmas before last, and fortified by a rather glass of red, I opened it. I can still picture the scene. The dogs in the bed, eyeing me with slumbering confusion at midnight, as I pulled out page after page of typed script. As soon as I read the first few pages, I knew I had to try and get it published.

My father’s dry humour permeated every word, mingled in with a dash of Philip Marlowe. As I read further, I was fascinated to see that the protagonist was based on Dad – he smoked a pipe, did crosswords and listened to Radio 3. He even had a daughter who worked too hard and tended to worry too much. That was rather unsettling.

So, I purchased a scanner with optical character recognition and set to work. The first publisher I sent it to, Crooked Cat Publishing, said yes. Maggie and I laughed and cried when it was accepted. We still can’t believe it’s true. To complement the book, I set up a small website. Looking through the old family photos was quite an emotional journey, too. I’m hoping some people in Dumfries might remember the name and share some anecdotes. So, Peter Andrew Winton Kelt. Author.

He never got a book published in his lifetime, but we got there in the end.