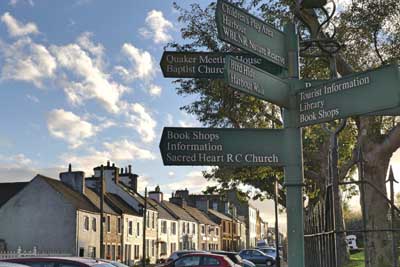 Maintaining its pre-announced dates (25 Sept – 4 Oct), the 2020 festival will have two main themes: Resilience and Connection.

Creative director Adrian Turpin said: “A key aim this year will be to raise the profile of Scotland’s National Book Town in Wigtown, its businesses and the cultural attractions of Dumfries & Galloway. The Wigtown Book Festival has a powerful role to play as we all look forward to eventual recovery, when the region will be able to welcome visitors again.

“Nobody wanted this situation but a digital festival gives us opportunities to reach new audiences locally, nationally and internationally.”

Inspired by Wigtown’s rebirth as a Book Town, the Resilience theme will explore the explosion of creativity that has emerged in response to the current crisis. It will also feature a digital showcase for the town’s many bookshops, plus The Kist, a virtual marketplace for artisan crafts and food producers.

Connection will celebrate Wigtown and its region’s international links in a number of events. This will include link-ups with other Book Towns around the world.

As well as live online speaker events, the 2020 festival will feature its usual mix of art exhibitions, film events, music and performance. A crowdfunding campaign will be launched later this summer to help support the festival.

Since March, Wigtown Book Festival has been offering a wide-ranging menu of digital content in response to lockdown, supported by Baillie Gifford. This includes a programme of live-streamed midweek events (#WigtownWednesdays) with writers such as Sally Magnusson, Hallie Rubenhold and Natalie Haynes, new writing commissions and a dedicated festival podcast. All are available on the festival website (wigtownbookfestival.com),

Talking about her involvement in the festival, Sally Magnusson said: “I’m delighted that the Magnusson Lecture will be online and that the festival will bring some of the previous lectures to a wider audience through the creative use of digital. Wigtown has already been engaging wonderfully with audiences during the crisis, and I’ve enjoyed participating myself.  I can’t wait for the autumn festival.”

Adrian Turpin added: “We have already put a lot of effort into creating original digital content, because we felt it was vital to engage our existing audiences and attract new ones throughout the crisis. This experience will stand us in good stead as we deliver a fully digital festival this year, with the hope that in 2021 we can all gather together again in one place.”

In addition to the above, WBF20 will feature the following activity with the full programme to be revealed in August: