This annual event, recently held in the Cochran Hall, once again proved to be a great success. The audience of teachers, families, friends, fellow participants and Rotarians were treated to a really entertaining concert by Kirkcudbright Academy students of all ages.

Each of the 25 young musicians taking part set out to be crowned as best musician or best vocalist of 2020. All competitors performed with great confidence and an enjoyment that was clear to the audience.

The winning instrumentalist in the junior section was Micah with his drum kit accompaniment to ‘ The Angry Fiddler’. 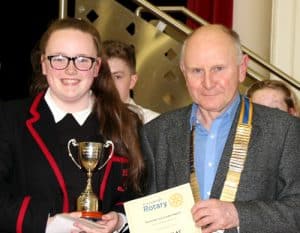 The winning instrumentalist in the senior section was Erin with the piano piece ‘Waltz in C# Minor’.

The winning vocalist on the night was Lauren Clark singing ‘Rise Up’.

The competition was judged by Eden Brown and Kate Picken MBE who both commented on the high standard of the performances as well as the confidence that the young people showed.

All the winners, runners up and those in third place received cash prizes from Kirkcudbright Rotary Club whilst all those taking part received certificates from Rotary to mark their contribution to the evening.

It was commonly acknowledged by the young people and their parents that the performances on the night could only have been achieved due to the commitment, leadership and inspiration of the dedicated teachers, Hannah Gill and Emma Irving music teachers at the Academy. Both were presented with a bouquet of flowers.