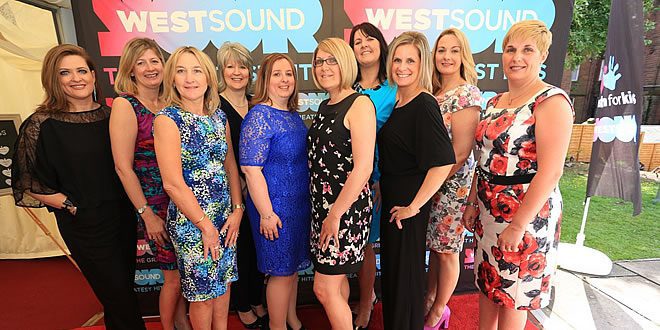 MORE than 100 women from across Dumfries and Galloway joined together at Friar’s Carse in Dumfries for the Westsound Ladies Lunch with Solway Outdoors on Sunday 28 June 2015.

The ladies were welcomed to the marquee in the grounds to the sound of Castle Douglas harpist Catriona Clark before Westsound’s very own breakfast presenter Tommy Jardine got the afternoon underway.

After a 3 course meal two Young Scottish Traditional Musicians of the Year, Robyn Stapleton and Claire Hastings, took to the stage performing a traditional Scottish music set with favourites from the likes of Robert Burns.

But it was a set from The Singer Swingers that rounded off the afternoon on a high performing timeless classics and modern favourites with women on their seats and tables singing along.

More than £1,600 was also raised for Cash For Kids in a raffle with prizes ranging from top priced U2 tickets to a luxury massage.

Following its success the Ladies Lunch is expected to be an annual event.

This year it was sponsored by Solway Outdoors in association with the Loreburne Centre.