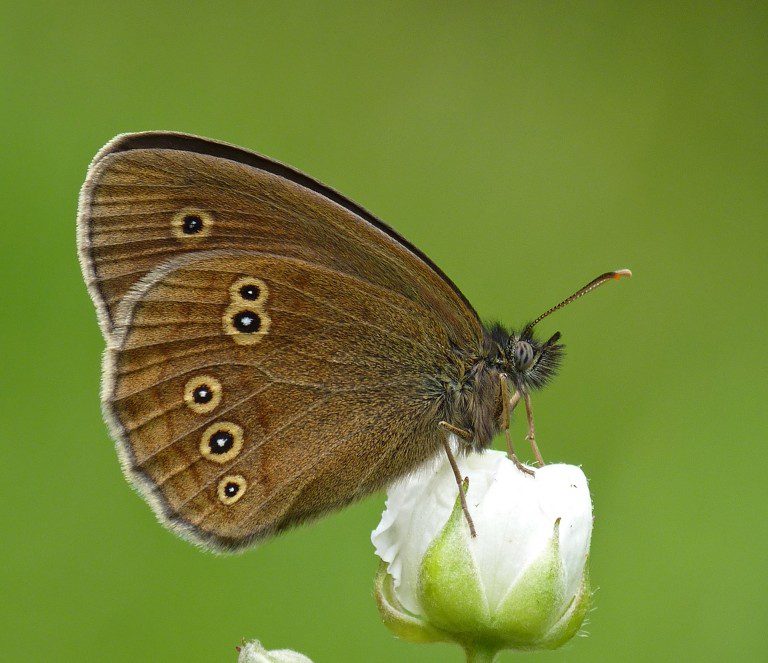 The beautiful Ringlet took advantage of the wet summer to take top spot in Scotland in this year’s Big Butterfly Count.

Numbers of Ringlet were up 221% compared to last year despite a generally poor summer for butterflies. The Ringlet is one of the few UK butterfly species that thrives in damper weather.

Wet and miserable weather saw the majority of Scotland’s 18 Big Butterfly Count target species fall in number compared to 2014. On average, only seven individual butterflies were seen per Count, a decrease of 37% compared to last summer.

Aside from the Ringlet, the Meadow Brown, Six-spot Burnet moth and Common Blue butterfly all experienced a rise in numbers compared with 2014, as did the migrant Silver Y moth.

The Green-veined White, the most common white butterfly in Scotland and the stunning Peacock were two of the biggest losers. Green-veined White numbers dropped by 80% year-on-year and the summer generation of the Peacock barely appeared at all – its numbers were down 97%.

Across the UK, the Holly Blue experienced its best Big Butterfly Count since 2010, with a 151% increase in numbers compared to 2014. This is a common garden butterfly in England and Wales but a rarity for Scotland that has only recently started to colonise here.

The butterfly follows a boom and bust life cycle due to its relationship with a parasitic wasp Listrodomus nycthemerus. The wasp inserts a single egg into the living Holly Blue caterpillar via its long syringe-like sting. The wasp larva then develops within the caterpillar, eventually killing it after it has changed into a chrysalis.

When numbers of both species are low the Holly Blue is able to build its population, but the wasp soon catches up to take advantage of the glut of Holly Blue caterpillars, causing the butterfly’s population to crash.

The Holly Blue has been struggling in recent summers with low numbers recorded, but this year the butterfly bounced back as it enjoyed a temporary advantage over the wasp.

A record 52,000 people took part in this year’s Count in the UK, spotting almost 600,000 butterflies during the three-week mid-summer recording period.

However the huge number of counts did not translate into huge numbers of butterflies. On average people saw 13.4 individual butterflies per Count, compared with 14.7 in 2014 as the wet, damp conditions proved less than ideal for butterflies, which thrive in warm, sunny weather.

“More than 50,000 members of the public from Scilly to Shetland enjoyed 15 minutes immersed in the wonderful world of butterflies, providing important data on how these beautiful insects are faring.”
Big Butterfly Count top ten Scottish species ranking