Home Business Faster broadband for more of Dumfries and Galloway 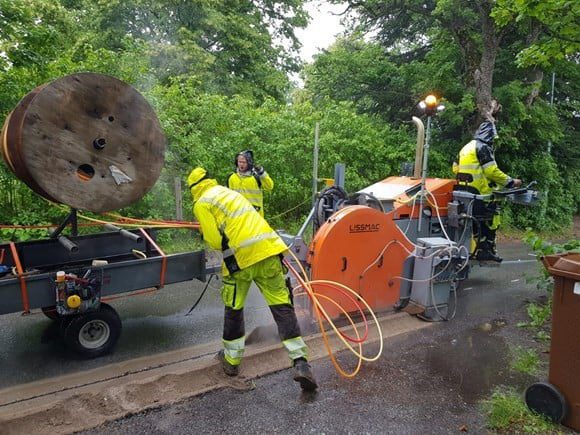 Almost all of the latest premises to be reached by the rollout – in Canonbie, Corsock, Creetown, Dalry, Kirkcolm, Mochrum, Moniaive, Sandhead, Southwick and Wigtown – are now connected to full fibre networks. Also known as Fibre-to-the-Premises or FTTP, the gigabit-capable technology provides ultrafast1 broadband directly into local homes.

Some additional coverage in Thornhill has also gone live.

Across Scotland, around 944,000 premises have now been passed by the programme. More than 5,000 new fibre street cabinets are now live – offering broadband services at speeds up to 80Mbps1 – and more than 15,000km of cable has been laid.

Engineers from Openreach will continue work on the ground in Dumfries and Galloway during 2020, thanks to additional investment as a result of innovation and new funding generated by stronger than expected take-up.

Across Scotland, more than 60 per cent of properties reached by the programme have now switched to faster fibre broadband.

Fibre technology offers fast and reliable connections at a range of speeds and there are many suppliers in the marketplace to choose from. Local people can check if the new fibre services are available to them at www.scotlandsuperfast.com/yourstreet.

Sara Budge, DSSB Programme Director, said: “More and more people have now signed up or are able to sign up to fibre broadband thanks to the £463 million Digital Scotland Superfast Broadband programme, and it is particularly pleasing to see this in rural areas and rural market towns such as Wigtown and Dalry.

“The difference that having fibre broadband can make to businesses or to improving the range of services available in the home is amazing. I’d urge everyone to take advantage of the faster speeds now available.

“There’s lots of competition out there and people may find they could be surfing at much higher speeds at a similar cost to their current service, but the key is for customers to contact one or more service providers to explore the options available to them, as upgrades to customers’ broadband packages are not automatic.”

Delivered through two projects – led by Highlands and Islands Enterprise in its area and the Scottish Government in the rest of Scotland – funding partners also include the UK Government through Building Digital UK (BDUK), BT Group, local authorities and the EU via the European Regional Development Fund, with Openreach leading the build on the ground.

Rob Davidson, Chair of Dumfries and Galloway Council’s Economy and Resources Committee, said: “It’s great news that the DSSB programme has reached more places in Dumfries and Galloway including Corsock and Thornhill. Whether you work from home or enjoy gaming, or simply just want to download a movie – having high-speed broadband lets this happen.”

Robert Thorburn, Partnership Director for Openreach in Scotland, said: “The Digital Scotland project is still breaking new ground and reaching new places. Through our partnership, more than 58,900 homes and business premises in Dumfries and Galloway can now connect to a fibre service.

“Our engineers remain as focused on bringing better broadband to as much of Dumfries and Galloway as possible as they were on day one. In these final months of the project we’re building ultrafast full fibre to some of the hardest-to-reach clusters of homes.

“The Digital Scotland rollout is a huge civil engineering success which has reached 100,000 more premises than planned and beat targets on time and under budget. It’s fantastic that 60 per cent of the homes and businesses we’ve passed have now upgraded, and I’d encourage anyone who hasn’t yet made the move to check if they could get a faster service.”