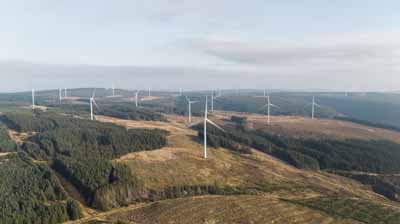 Following the recent announcement that Vattenfall has awarded a multi-million-pound contract for the construction of South Kyle Wind Farm, the company is today unveiling proposals for further investment in South West Scotland.

Vattenfall has studied previously identified projects, and following careful consideration is exploring the potential for two new wind farms in the region along with a battery energy storage facility at each location.

Vattenfall has submitted a scoping report to the Scottish Government this month.  The scoping report launches the early stages of the Environmental Impact Assessment process.  The company is also keen to start researching and prioritising views from the local community to help shape their proposals.

“South West Scotland has the potential to become a green energy hub.  South Kyle, Quantans Hill and Whiteneuk can play a major part in helping to power Scotland towards net zero and provide green shoots of recovery from the economic damage of Covid-19.

“Vattenfall wants to work with local communities, suppliers and partners to not only co-ordinate how our investments might benefit specific localities, but also to explore and create significant opportunities for South West Scotland.”

“Although these proposals are at an early stage, we are keen to hear from local communities at the earliest opportunity. Over the coming months, we will be liaising with community groups and representatives to discuss the proposals and take comments, questions and suggestions. We have also created online feedback surveys, and we welcome views from as many local people as possible.”

Further information on how the local community can become involved can be found on the project website www.vattenfall.com/uk