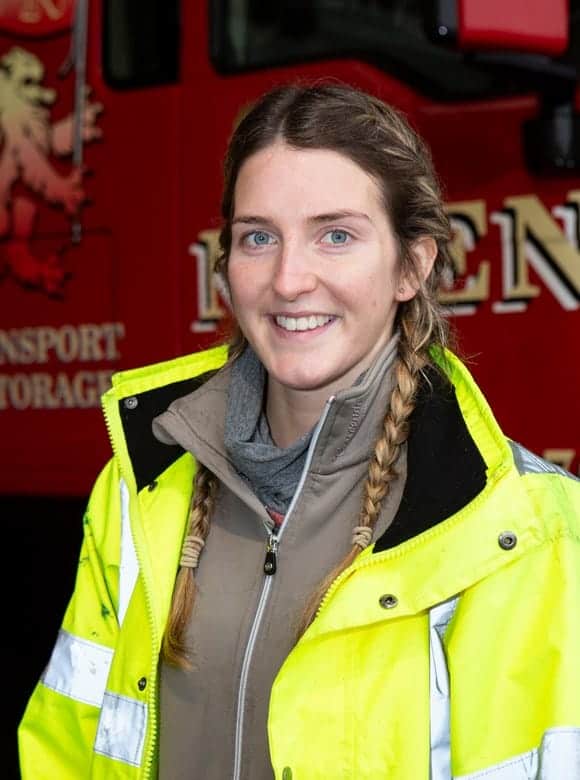 Glencaple’s Jayne Dalrymple swapped beauty therapy for HGVs thanks to her Modern Apprenticeship.

The 24-year-old left school to pursue a career in the beauty industry, landing a role in a salon and becoming a fully qualified beautician. However, she always had aspirations to fulfil her childhood dream.

Since she was young, Jayne has wanted to be a lorry driver. After doing some research, she found that a Modern Apprenticeship was the best route for her to make this dream a reality and gain an HGV licence.

Jayne explained: “I’ve always wanted to be able to drive a lorry. When I left school, I didn’t have the confidence to enter a traditional male-dominated environment, so I started working in a salon. I wasn’t 100% happy in that job and decided it was time for a change.

“I phoned Nithcree Training and they explained that a Modern Apprenticeship would be the best method to gain my HGV licence. They put me in touch with TP Niven and everything went from there.”

Since making the switch in 2020, the former Dumfries High School pupil has been supported throughout her apprenticeship, allowing her to earn and learn at the same time.

Jayne’s Modern Apprenticeship meant she was able to learn the ins and outs of the industry, which would allow her to gain her HGV Class 1 license as well as her forklift ticket, which Jayne believes gives her even more independence.

Jayne added: “Modern Apprenticeships are the best approach because they support you to gain your licenses, while also getting some experience behind you. As I’m progressing through my license qualifications, I’m also learning on-the-job every day.

“If I could speak to myself when I was about to leave school, I’d tell myself never to hold back or be scared. TP Niven is a brilliant company to work for and I always know I have their support.”

Due to the pandemic, Jayne’s Class 2 test has been delayed, but she has remained positive.

Jayne continues to learn on the job and knows she’ll be ready for her test when circumstances allow her to sit it.

She said: “If I can gain my Class 1 license, I willhave achieved my dream. That’s what I’ve always wanted to do so I’ll have met my career goal, thanks to my Modern Apprenticeship.”

Moving into what can be viewed as a male dominated industry, Jayne admits she had inhibitions.

She explained: “I was really nervous as the only female HGV driver at TP Niven but everybody helps you and there’s no such thing as a stupid question. It’s really nice to have the team at TP Niven backing you in what you want to do.

“I haven’t come across many other female drivers, but I’d encourage others to enter the profession. There is no such thing anymore as a male or a female job. But I think females should go for whatever job they want and refuse to be held back.”

Lockerbie-based haulage firm TP Niven has an established history of giving local people an opportunity, with six Modern Apprentices currently on the books.

Gordon said: “We value the qualities that Jayne brings to the business and how she has progressed with the company since joining us.

“Modern Apprenticeships are the best way to ensure succession in our business. As people progress elsewhere in their career, or retire, we feel it’s important that we have a progression pathway in place. TP Niven is a third-generation family business and we all began from the grassroots.

“Modern Apprenticeships allow us to start with a blank canvas. We give young people opportunities and experience to support them through their career. What better way to ensure a pipeline of talent than by growing your own workers from within your own business?”