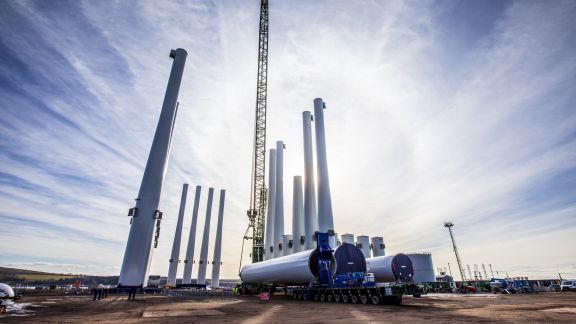 Crown Estate Scotland has today announced the outcome of its application process for ScotWind Leasing, the first Scottish offshore wind leasing round in over a decade and the first ever since the management of offshore wind rights were devolved to Scotland.

The results coming just months after Glasgow hosted the global COP26 climate conference show the huge opportunity that Scotland has to transform its energy market and move towards a net zero economy.

“In addition to the environmental benefits, this also represents a major investment in the Scottish economy, with around £700m being delivered straight into the public finances and billions of pounds worth of supply chain commitments. The variety and scale of the projects that will progress onto the next stages shows both the remarkable progress of the offshore wind sector, and a clear sign that Scotland is set to be a major hub for the further development of this technology in the years to come.”

Should any application not progress to signing a full agreement, the next highest scoring application will instead be offered an option.

Once these agreements are officially signed, the details of the supply chain commitments made by the applicants as part of their Supply Chain Development Statements will be published.

This is just the first stage of the long process these projects will have to go through before we see turbines going into the water, as the projects evolve through consenting, financing, and planning stages. Responsibility for these stages does not sit with Crown Estate Scotland, and projects will only progress to a full seabed lease once all these various planning stages have been completed.

“The scale of opportunity here is truly historic. ScotWind puts Scotland at the forefront of the global development of offshore wind, represents a massive step forward in our transition to net zero, and will help deliver the supply chain investments and high quality jobs that will make the climate transition a fair one.

“It allows us to make huge progress in decarbonising our energy supply – vital if we are to reduce Scotland’s emissions – while securing investment in the Scottish supply chain of at least £1 billion for every gigawatt of power. This will be transformational. And because Scotland’s workers are superbly placed with transferable skills to capitalise on the transition to new energy sources, we have every reason to be optimistic about the number of jobs that can be created.

“That means, for example, that people working right now in the oil and gas sector in the North East of Scotland can be confident of opportunities for their future.  The spread of projects across our waters promises economic benefits for communities the length and breadth of the country, ensuring Scotland benefits directly from the revolution in energy generation that is coming.

“The scale of opportunity represented in today’s announcement exceeds our current planning assumption of 10GW of offshore wind – which is a massive vote of confidence in Scotland. So we will now embark on the rigorous consenting process required to make sure we can maximise the potential that clearly exists in offshore wind while also ensuring that the impacts of large scale development  – including on other marine users and the wider natural environment – are properly understood and addressed.

“While it is not yet possible to say with certainty what the scale of development will ultimately be, there is no doubt that the scale of this opportunity is transformational – both for our environment and the economy.”