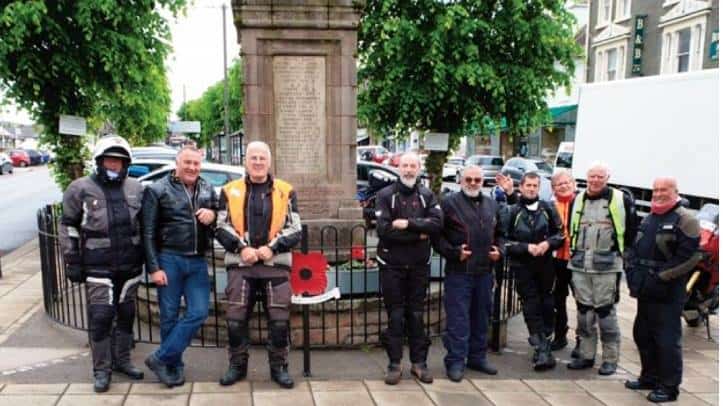 The Galloway Motorcycle Club are delighted to have raised £1,885 to date towards their minimum target of £1,921 for their 2021 chosen charity, poppyscotland, who, since 1921, have been supporting Scotland’s ex-Servicemen, women and their families.

Poppyscotland are celebrating their Centenary this year and the Road Run section of the Club signed up for the 1921 Poppy Pledge. They have now completed four of their planned 10 road runs which will total 1,921 miles.

The first run, in May, started at the Memorial Garden, Wallaceton, and covered 199 miles ‘Around the Merrick’. This was followed by a 230 mile run from Gretna in June. Later in June saw the group leaving Moffat to travel around South Lanarkshire covering 148 miles. The latest run, on July 6th, was around the Solway and Carrick coast totalling 245 miles. Runs start and/or finish at a local War Memorial.

The Club are delighted by the support shown by both members and non members alike in taking part in these runs and thank all who have donated to our JustGiving page where funds are sent directly to poppyscotland.

Crispin Bardsley of the Road Run Group said:
“The South Lanarkshire Run was particularly enjoyable with fish and chips for lunch at Strathaven. Arriving back in Moffat we parked our bikes at the War Memorial and went up the street for ice cream which we enjoyed stranding with our bikes and discussing the day’s riding adventure.

“We are looking forward to future runs and hope to welcome more riders for what are, quite frankly, great days out exploring our region in the company of like-minded individuals and raising funds for a very good cause.”