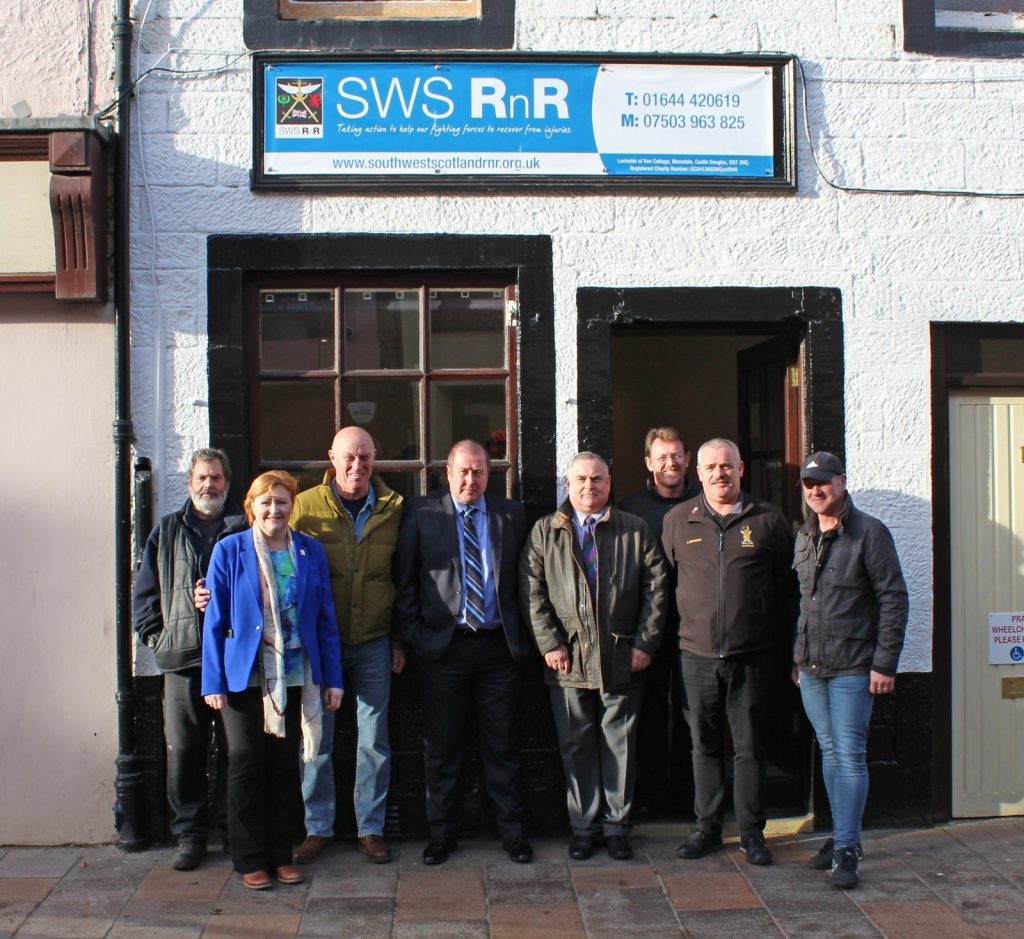 The South Scotland MSP joined the Scottish Government’s Minister for Veterans, Graeme Dey, last week on a visit to the charity’s office on Friars Vennel in Dumfries to meet the charity’s trustees and former soldiers who have been successful in obtaining their HGV license to hear more about their work.

When SWS RnR takes on veterans, which can be up to four at a time, they will receive medicals, CPC and Theory training throughout their stay with the charity while being put through training for both the HGV2 or HGV1 practical. The process usually sees an ex-serviceman obtain the qualifications within a relatively short period of time, before being employed soon after as a lorry driver – an occupation with a high number of vacancies in Scotland and the UK as a whole.  SWS RnR are looking to diversify further into Security SIA training in the future.

“I was delighted to invite and join Minister Graeme Dey on the visit to SWS RnR in Dumfries recently to hear from the charity about their outstanding and commendable work in helping our veterans into employment.

“Veterans are an asset to our society and deserve the best possible care and support, and it was wonderful to learn about the work of SWS RnR and how a retired soldier can be given this training and support that they need to be put through their HGV  and hopefully in the future, security guard qualifications.

“We discussed a number of other issues as well, from challenges of obtaining housing to supporting veterans who have chosen to relocate to Scotland following leaving the military.

“The Scottish Government takes the welfare of our veterans extremely seriously and last year Graeme Dey appointed Charles Wallace, an army veteran with 35 years experience, as Scotland’s second Veterans Commissioner, taking over from Eric Fraser who served for 37 years in the Royal Navy. It is Mr Wallace’s role to promote the interests of former members of the armed forces and I will be writing to him about the work of SWS RnR.

“I was pleased Mr Dey made the visit to Dumfries & Galloway to meet with the charity and I look forward to working closely with the committee members in the future.”

“It was a pleasure to meet Mr Dey last Monday, and his visit demonstrated the concerns that the Scottish Government have for the welfare of its ex-combatants.

“The fact they are meeting with charities and organisations like ours that are having a positive impact on veterans lives, shows their commitment to wanting to make a real difference to those who have served our Nation with pride.

“The study Mr Dey and his team are undertaking can only be in the best interest of all veterans in Scotland and I thank him most sincerely for his efforts.”

“As Armed Forces Champion for Dumfries and Galloway and the Vice Chair of SWSrnr, it is important to have visits from ministers to understand the complexities of ex-Forces personnel and what we can do at a local level to help them achieve those opportunities to ensure that they can be suitably employed.

“I would like to thank Graeme Dey MSP as the veterans minister for visiting and understanding what those issues are. As a rural region small charities like ours make a huge difference.”