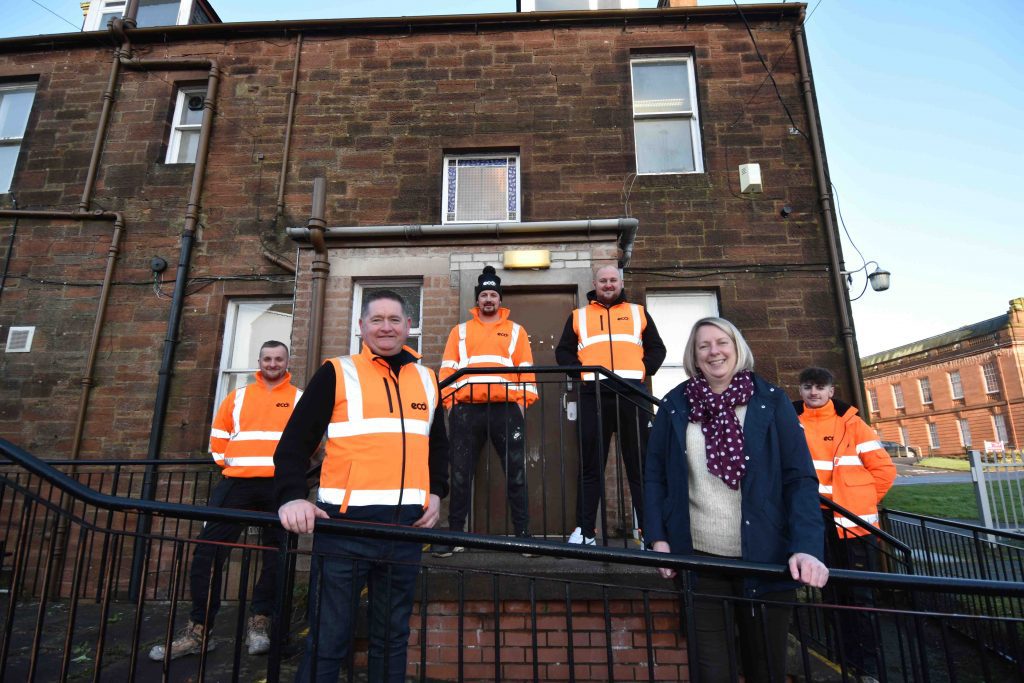 The transformation of a former council building into a Dumfriesshire charity’s new headquarters has been hailed as a triple-win.

Food Train has appointed Annan-based solutions business Eco Group to lead the renovation of the Dumfries town centre site into its first purpose-created base and community hub for older people.

Work on the former Dumfries and Galloway Council office building on English Street started this week, with the charity hoping to move in later this year.

Food Train chief executive Michelle Carruthers said: “We’re delighted to have work underway and that we’ve been able to appoint a local contractor to turn our vision to help improve the lives of older people into reality.

“The project really is evolving into a triple win – for our charity in its long-held hope for a home of its own, for the community by turning a building which has been empty for some time into a great new asset and for the area’s economy by bringing in a local company to deliver it.

“Like Food Train, Eco Group is Dumfriesshire-founded and has gone on to make a national impact while never losing sight of its roots. It’s great that we can invest in our future together.”

Eco, which last year opened its own 3,000 square-metre purpose-built HQ at Annan Business Park, will carry out the work through its Eco Projects design, build and fit out division. It will also use local sub-contractors.

Managing director Eddie Black said: “It’s a privilege to be involved in delivering this fantastic project for Food Train.

“The charity’s work makes a huge difference to the lives of older people in Dumfries and Galloway and beyond, and the new HQ will put it in an even better position to help those most in need.

“As a company we’re committed to creating a vibrant and thriving economy for Dumfries and Galloway, and the Food Train project is a great example of what can be achieved with vision and determination.”

The creation of a centre for older people was one of the ambitions of Food Train’s founders as they launched a shopping delivery service for those aged 65 and over in Dumfries in 1995. The charity has since expanded to offer a range of services to ensure older people can eat well and live well in their own homes.

It secured the building with support from Dumfries and Galloway Council, whose own headquarters stand opposite.

Once open, plans are for the centre to be a hub for advice and activities for older people, as well as a venue for Food Train’s befriending groups, widely recognised for their valuable role in tackling loneliness among older people.

It will also provide office and meeting space for community groups and other organisations.

As well as being the the central hub for Food Train’s work in Dumfries and Galloway – with branches in Annandale and Eskdale, Nithsdale, Stewartry, Newton Stewart and Stranraer – the new HQ will also provide support for its shopping service operations in nine other Scottish local authority regions. That’s on top of supporting its Connects, Meal Makers and Eat Well Age Well projects nationally.