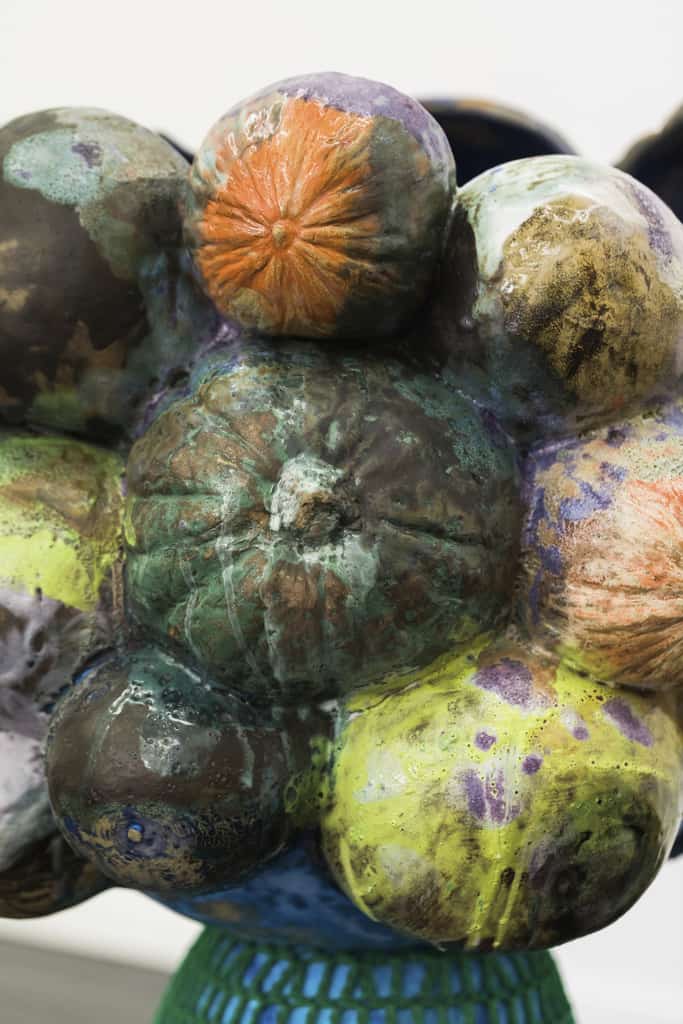 CAMPLE LINE is pleased to announce a solo exhibition of new work by artist Laura Aldridge: sumVigour. In this exhibition, Aldridge presents a group of ten new works created in her studio over the last few months, which offer new developments in surface, scale, arrangement and sensory effect in her use of ceramic and textiles. A mixture of wall-based and freestanding work, she brings them together at CAMPLE LINE in the distinctive proportions of the gallery.

The exhibition will open on 19 June and run until 29 August 2021 and is accompanied by a new text  by Oliver Basciano.

Laura Aldridge, Comparing my insides, to other people’s outsides (that’s your freedom), 2021,

‘Since the start of the first lockdown, I have been focused on allowing ideas to flow and for things to become something sometimes, or nothing other times. Just before the pandemic I made a research trip to San Francisco in the US to visit Creative Growth in Oakland, and it cracked something open in me … I wanted to just make for a while and see where it got me.’ – Laura Aldridge

Vibrant and tactile, Laura Aldridge’s work engages, indeed embraces, all our senses. Taking many forms and scales, her work derives from her deep-seated instinct for colour and texture, and from the knowing and intuitive approach she takes to making and to materials and their possibilities. She has said: ‘Being completely absorbed in the process of making, being alert and open is really very important to how an idea develops. It is physical research and it is how I move the work forward.’

Working across textiles, glass, ceramic and found objects, and with processes such as printing, casting and dyeing, Aldridge’s body of work moves freely between wall-based reliefs and sculptural assemblages or installations, playing on the abilities of ‘collage’ to operate in two and three-dimensions. She has herself described her work as a form of expanded collage, and she often arranges elements of her works upon tables, low plinths or across gallery walls to bring ‘things’ together so that they might coalesce as a whole.

Of the exhibition’s title, sumVigour, Aldridge has explained: ‘I wanted to combine some words, to make a new thought for what I was doing. I noticed how words increasingly appear as hashtags and how, often, this affects how you read and take in information. ‘Sum’ works for me because to hear it, you could be saying ‘some’ – as in ‘with some vigour’- but to see and read it – it speaks of addition, of two or more of something. Then, to have that mundane word next to something much bigger and more assertive – VIGOUR. I like it because it speaks to something beyond the singular – to groups, combines, and energy.’

Included in sumVigour is a group of six large-scale ceramic vessels that sit upon their own plinth systems or what Aldridge calls ‘texture totems’. Alongside these are two new works that develop Aldridge’s on-going Things That Soak You series (2016 – ongoing), and two new wall-based banner collages featuring wind chimes, which extend recent works made for Edinburgh and Stavanger in Norway.

The new ceramic works build upon a number of plinth-based stoneware vessels or pots that Aldridge made for Paris Internationale as the first lockdown was lifting. Though smaller in scale, those works anticipate the new group for Cample with their luscious, vivid glazing and bold ceramic appliqué, as well as in the processes of stacking and inverting that Aldridge used, and their inclusion of objects and materials such as books, fabrics and fur cushions.

Of her ceramic work, Aldridge has noted, ‘an idea of functionality and use helped to get me started – that usually begins with thinking about a particular person, as an anchor that I soon set off from as I get into making,’ adding that whilst working on the clay vessels, ‘…I hold someone in my mind as I am making. It brings about an affection for what I am making as it is a very slow process that I have to invest in.’

As can be seen with the large Comparing my insides, to other people’s outsides (that’s your freedom), 2021, Aldridge has achieved a new complexity of colour, form, texture, surface, and detail in these works for Cample. Across all six ceramic works, recognisable everyday elements abound – melons and lemons, flowers, ties, bows and swags, and clay slabs and fragments. The primary ceramic vessels sit upon ‘texture totems’ devised by Aldridge to elevate them, and incorporate an array of materials including glass, hair nets and shredded cardboard. Part of the work, they focus attention on the transition between materials and, correspondingly, the sensations they evoke.

Likewise, with the two new works in her Things That Soak You series (2016-ongoing), Aldridge has scaled up and multiplied the handmade ceramic brackets (what she called ‘true flops of clay’) from which brightly coloured netting of varying lengths hang. As a result she has spoken of an increase in the ambition of the works: ‘… when the pieces of netting are filled with different weighted fabrics and increasingly other materials, they become bodily, like skins filled with stuff. What I put inside can pull on the net, or if it’s lighter, then it can seem to float inside it … I want the resulting forms to provoke really haptic thinking, physical thinking.’

Aldridge also includes two new banner works, which were created by scanning textured fabrics, objects and images that were physically and visually flattened out and then arranged through a process of layering and collage to form the final banner surface. There is no depth of field, no zooming in or out, all of the material is democratised, seen on the same visual plane – with the exception of the protruding wind chimes that react gently to the passage of people around the building. The effect could easily be one of joyous and playful confabulation, as the visual, textural and aural fragments freely associate with one another and with our own remembered sensations.

Writing of Aldridge’s work in 2019, Kyla McDonald ‘s observations that she strives ‘to form a material language that urges us to feel something. To affect us. To soak us’ seem especially poignant given the constraints of distance we have collectively observed and navigated throughout the pandemic. The works brought together in sumVigour carry the promise of a physical and emotional charge – accumulating patiently in the material ready for encounter.

CAMPLE LINE will reopen by appointment and with continuing measures in place. It continues to monitor and respond to Scottish and UK Government requirements and guidance, so please check the website nearer the time for details.