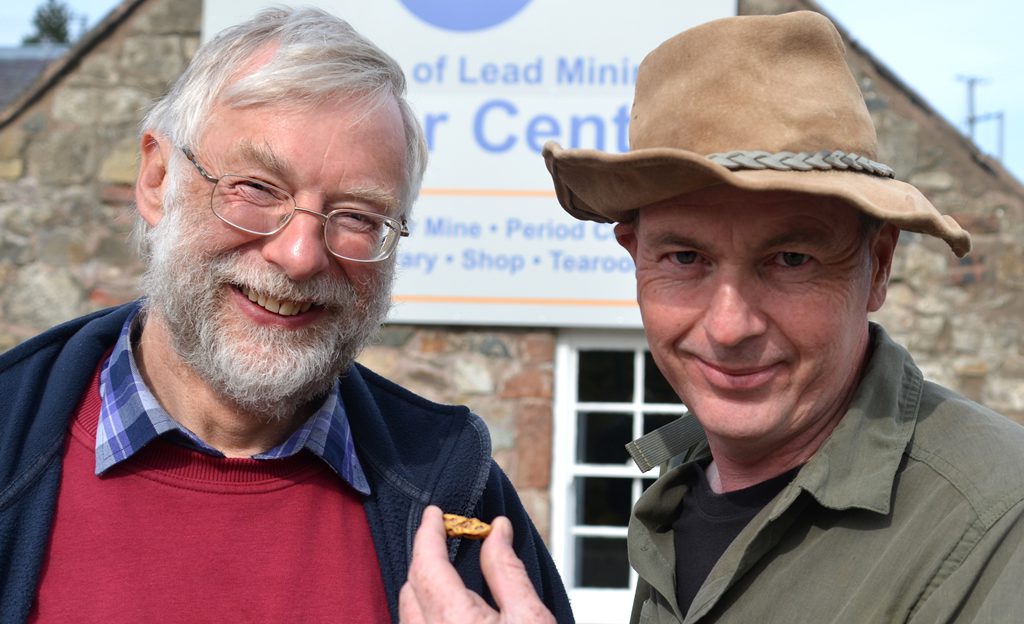 The most significant find of Scottish gold in the past 70 years was hauled from a river near Wanlockhead this morning (Thursday, 4 June).

And the 20 carat golden nugget, weighing around 18.1 grams with an estimated value of £10,000, was almost thrown back into the water by its finder, a Canadian gold panning student.

The man, who prefers to be described as John and hails from the Gold Rush province of British Columbia, was learning to pan for gold under the watchful eye of expert Leon Kirk, who runs gold panning courses from the Museum of Lead Mining in Scotland’s highest village.

John said: “Leon was telling me how to look out for haematite, the red coloured mineral which is often found with gold.

“We were a few minutes into panning when I found the nugget with a bean tin, an underwater viewing tin with a glass base.

“I saw the piece lying just under the surface of the water and picked it up. It didn’t look like much and I was just about to throw it back when I thought I should double-check with Leon first.

“I said ‘is this gold?’ and couldn’t understand his excitement.

“Looking at the size of the piece I still can’t believe it’s such a big deal but it’s very interesting to watch the reactions.”

Golden nuggets of this size are extremely rare in Scotland, a country which does not have a commercial gold mining industry. In consequence, any Scottih gold extracted or panned is considered to be extremely rare and commands a premium price. Most of the larger pieces of Scottish gold have been found in this small area of the Lowther Hills which was once known as God’s Treasure House of Scotland.

Leon said: “I like to tell my students that everyone goes home with a flake or two of gold, but this is exceptional.

“I always knew there were sizable nuggets in these hills but, in my decades of panning, have only found very small pieces or flakes.

“The last significant find was made in 2002, ironically during the Queen’s Golden Jubilee, and that weighed in at six point one grams and is only a third of the size of the nugget that was found today.

“This is such a major discovery that people will be talking about it in 30 years’ time.”

Leon’s collection of gold boasts a piece he panned in Perthshire weighing in at 16.5 grams, the biggest nugget he has found since he began panning over 20 years ago.

He added: “I am over the moon. This find leaves a really positive message that there are still big nuggets out there to be found just a few inches beneath the water.”

Both Leon and the museum run regular gold panning courses which teach enthusiasts the rudiments and techniques of panning as well as a give few very helpful tips.

John added: “Knowledge is everything. Panning is not dependant on having fancy equipment. It’s all about knowing where to find the gold and this is what Leon taught me. Today’s efforts showed that his tuition certainly worked for me.”

Museum trustee Gerard Godfrey said: “We are absolutely delighted with such a significant find.

“No doubt there will be a mini gold rush once this gets out but we are very happy with that.

“We welcome responsible panners to the area and have all the equipment and information necessary for experienced or novice enthusiasts.

Panning licences, equipment and information on courses may be obtained from the museum. Visit www.leadminingmuseum.co.uk to learn more.