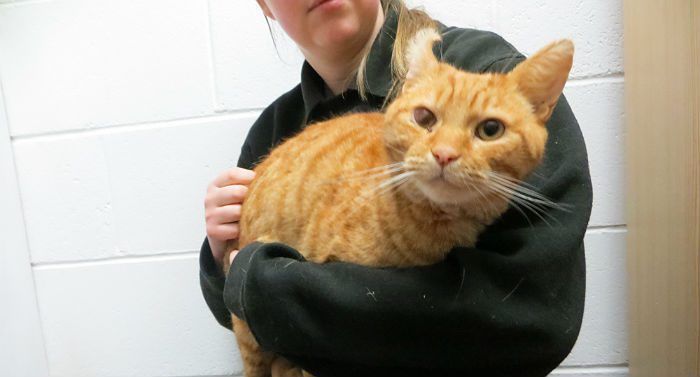 The Scottish SPCA is appealing for information after a cat was cruelly trapped inside a recycling bin on local popular dog walking spot, “the approach” in Stranraer.

Scotland’s animal welfare charity was alerted Friday (13 January) when a dog walker found the cat inside the bin.

The feline is now being cared for at the charity’s animal rescue and rehoming centre in Ayrshire where he has been named Dusty.

“He’s lucky that he was found by the member of the public whose dog took an interest in the bin.
“Dusty was inside the bin with the lid closed. He had been put there with a puppy blanket but no food or water and has an injury to his ear and a sore right eye.

“He’s been seen by a vet who is confident he’ll recover from his injuries and is now being looked after by our Ayrshire centre.

“We are appealing for anyone who has any information, or noticed any suspicious activity to get in touch with our animal helpline on 03000 999 999.”

Abandoning an animal is an offence under the Animal Health and Welfare (Scotland) Act 2006. Anyone found guilty of doing so can expect to be banned from keeping animals for a fixed period or life.