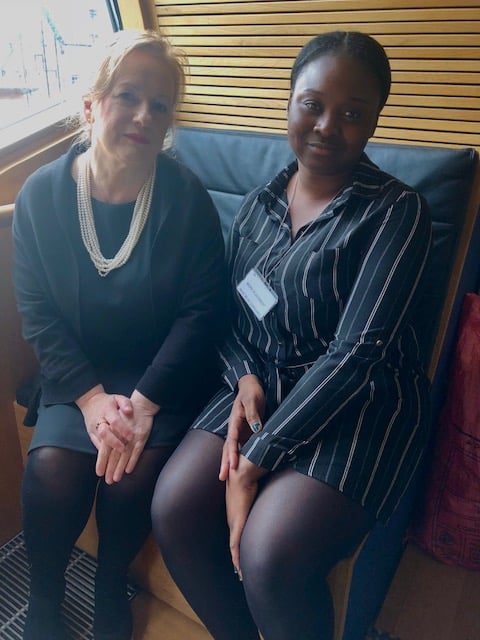 An aspiring midwife from Dumfries who has had her right to study revoked by the Home Office will meet with Scottish Health Secretary Shona Robison today (Thursday).

Twenty year old Dami Samuel – who has lived in the UK  all her adult life – secured a place to study midwifery two years ago before the Home Office refused her family’s visa application.

Dami and her family, who live in Dumfries, featured in a recent BBC Scotland programme Breadline Kids documenting the hardship of families affecting by poverty.   The film won the broadcast category this week in the Scottish Refugee Media Awards.

The family have been totally destitute since their visa application was refused two years ago – they are legally prevented from working and are ineligible for benefits. Since 2016 they have been supported by charities, mainly the Dumfries and Galloway First Base organisation.

Dami is in the Scottish Parliament this week as a guest of south Scotland MSP Joan McAlpine.

“Dami is an extremely bright and talented young woman who considers Scotland her home and wants to work in our NHS – but she is being denied that chance by Theresa May’s Home Office despite the fact she has lived in the UK since she was 12.

“That’s why I am delighted that our Cabinet Secretary for Health Shona Robison has agreed to meet Dami – Ms Robison knows the difficulties the UK’s vindictive immigration causes for recruitment to the Scottish NHS.

“Dami’s mum worked as a nurse in London, but now the family are in limbo as the Home Office drags its feet on granting their Leave to Remain application.  Dami fills her time by volunteering at the local leisure centre, playing drums in her church band, and learning guitar.

“Dami had secured a place to study midwifery here two years ago but it was taken away from her because the Home Office are forcing the family to go through a protracted appeals process.  She doesn’t even have access to her passport and other official documents as the Home Office has taken them away. It’s an appalling way to treat anyone  – this family are totally in limbo and it’s such a waste.

“I am looking into doing whatever we can for the family and to support Dami – but the sad fact is that Westminster holds the power.”