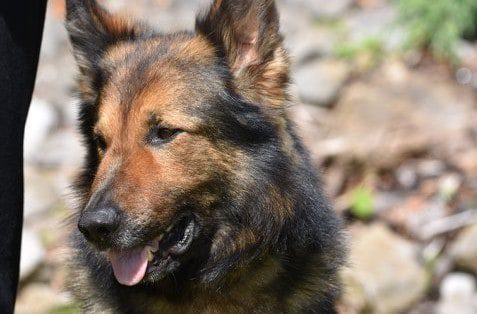 Police Dog Storm and his handler PC Raymond Martin have been awarded BTP’s prestigious ‘Bryan Trophy’ in recognition of their invaluable contribution at the scene of a hit and run in Scotland.

PC Martin was driving along the M8 towards Edinburgh on 27 May 2020 when he came across a vehicle on its roof, straddling the hard shoulder and the inside lane.   After making enquiries with witnesses at the scene, PC Martin quickly established that two men had made off from the scene towards woodland.

He deployed PD Storm who was able to pick up their scent and track them through several fields, a river and an electric fence. PC Martin was electrocuted in the process but thankfully wasn’t badly injured and he was able to continue the search.

Storm tracked the two suspects to 3.5km away where he found them hidden underneath a riverbank and partly submerged by water. Storm then assisted in detaining them until colleagues from Police Scotland arrived. Both men were arrested and charged with a variety of offences.

It’s now time for PD Storm to put his paws up and retire following seven years of service in Scotland.

Also nominated for the award were PD’s Frankie and Ben. In October, PC Harris and PD Frankie who conducted a search for two burglary suspects who had made off onto the railway lines in London. The pair tracked the suspects to almost two miles away, assisted in detaining them and recovered stolen property.

Chief Inspector Pete Kooper said: “Huge congratulations are in order for PC Martin and PD Storm who demonstrated exemplary perseverance and determination in tracking two suspects who had tried their best to flee the scene of a crime.

“It’s a fitting end to an illustrious career in BTP for PD Storm who has spent seven years protecting the railway network in Scotland. We’d all like to wish him a very happy and much deserved retirement.”