Councillors and Youth Council Members Pay Tribute To The Queen 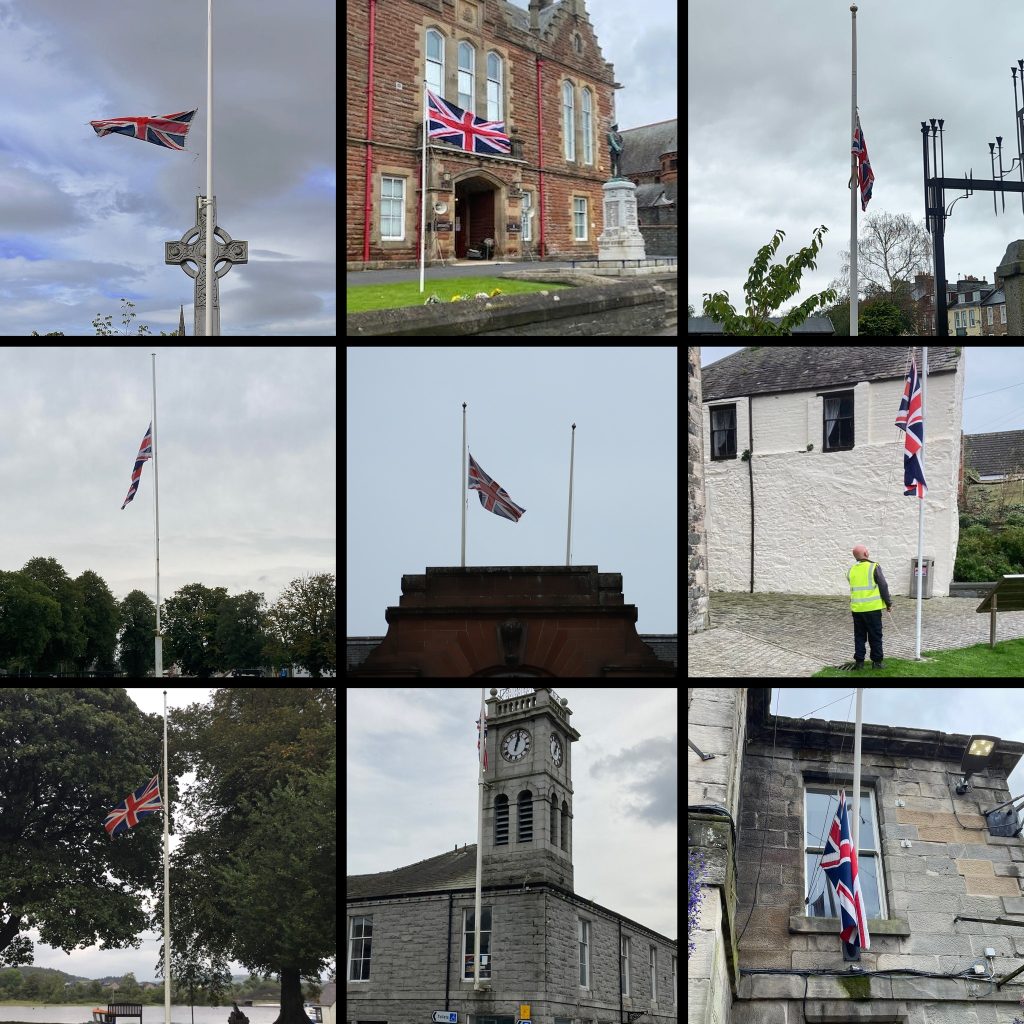 A special meeting of Full Council took place on Tuesday 13 September at Council HQ in Dumfries.

Councillors gathered to reflect on the life and arrangements on the recent death of Her Majesty Queen Elizabeth II and the accession of His Majesty King Charles III.
Members of Dumfries and Galloway Youth Council Sophie Wilson, Riley True and Kenzie Miller also participated.

Speaking at the meeting:
Convener and Co-Leader Stephen Thompson said: “It has been a sombre privilege to be Convener over these days and to be part of this history-making period. I wrote in my contribution in the Book of Condolence that the late Queen has been ‘an exemplar of duty and diligence in fulfilling her role to so many people over so many years’. She has been a model for any civic leader to follow.

“As His Majesty King Charles III is welcomed to the throne, we may see resonance with many of the issues that are important to our region and this Council – the importance of the countryside and the environment, concern about climate change, and a passion to provide practical support to help young people into employment. So, along with the new Monarch, we look forward to supporting a shared endeavour of caring for the people of Dumfries and Galloway for years to come.”

Deputy Convener and Co-Leader Linda Dorward said: “From a personal perspective, losing Her Majesty is like losing a member of my own family; she has been there for my entire life. The Queen was born six years after my Mum. I believe that having lived through the years of Depression and World War Two, these women, from entirely different backgrounds, shared similar values shaped by these times…don’t moan, keep going, stay useful, we will overcome…values that we would do well to try to live by today.

“For me as a newly Elected Member part of a speech Her Majesty gave in 1952 is as relevant today as it was then, when she said ‘many grave problems and difficulties confront us all, but with a new faith in the old and splendid beliefs given us by our forefathers, and the strength to venture beyond the safeties of the past, I know we shall be worthy of our duty.’”

Speaking on behalf of Dumfries and Galloway Youth Council, Member Sophie Wilson said: “There is no denying that the royal family have had a significant impact on the opportunities available to young people in Dumfries and Galloway in a way that is often not seen. The Prince’s Trust and the Duke of Edinburgh’s Award are initiatives that have had a positive impact throughout the region, supporting young people in employment, higher and further education and more generally to access opportunities that would not have been available to them otherwise.”

Youth Council Member Riley True added: “On behalf of Dumfries and Galloway Youth Council we would like to express our deepest condolences to the royal family in light of the passing of Her Majesty Queen Elizabeth II. Looking forward, His Majesty King Charles III has a focus on climate change and environmental issues, and we are optimistic as we move into this next chapter that young people will continue to benefit from the existence and provision of these programmes and others like it within Dumfries and Galloway.”

This includes Council teachers and support staff, and all Dumfries and Galloway Council schools and nurseries will close on Monday 19 September. Private nurseries and childminders will make their own arrangements and communicate directly with families.

Essential Council services will continue to operate. A dedicated webpage will be set up on the Council’s website as soon as possible to detail how this will affect Council services on Monday 19 September. Please follow our Facebook and Twitter accounts for latest updates.

In addition, it was agreed that the contributions read out at Full Council today by Elected Members of Dumfries and Galloway Council on the passing of Her Majesty Queen Elizabeth II will be reflected in the Letter of Condolence sent to His Majesty King Charles III by the Convener and Deputy Convener after the State Funeral and National Day of Mourning.