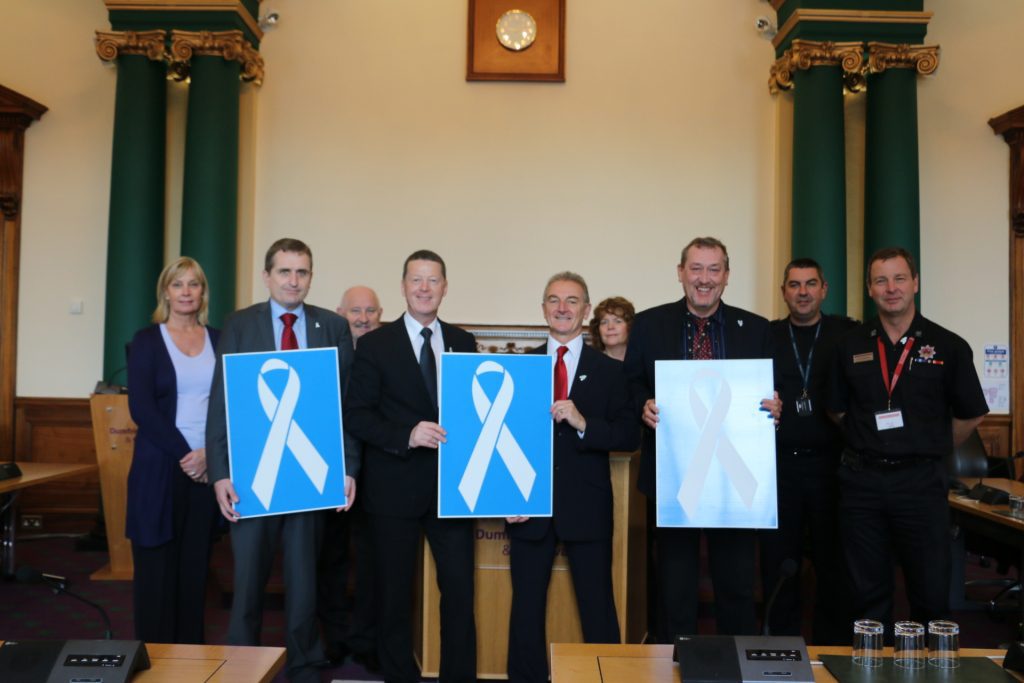 The Dumfries and Galloway Community Planning Executive Group (CPEG) has agreed to endorse the work of the Domestic Abuse and Violence Against Women Partnership (DAVAWP) towards obtaining White Ribbon Accreditation for Dumfries and Galloway.
To support the initiative, CPEG Members have signed the White Ribbon Pledge “to never commit, condone or remain silent about violence against women in all its forms”.
The White Ribbon Campaign started in Canada in 1991 and it has become an international campaign whose main focus is to provide men with a platform to speak and to take action against all forms of gender based violence i.e. domestic abuse, rape, sexual assault, forced and child marriage, female genital mutilation/cutting, so-called ‘honour’ crimes, sexual harassment, stalking, prostitution, sex trafficking and other forms of commercial sexual exploitation.
The DAVAWP and White Ribbon Scotland have been collaborating for several years in the prevention and awareness fields running various projects and events to encourage local men to get involved. These included community documentary screenings followed by discussions on various issues; training local White Ribbon Speakers; developing a ‘Take Action’ page on the DAVAWP Website; and running campaigns in partnership with Queen of the South F.C which included photos of the Team wearing white ribbons that were handed out to more than 3,000 Queens supporters at a White Ribbon game in December 2014 at Palmerton Park.
Local residents who want to support the D&G White Ribbon Campaign can go to: www.whiteribbonscotland.org.uk/d&g
Professor Hazel Borland – Executive Nurse Director and DAVAWP Chair said: “I am delighted that the Community Planning Executive Group has endorsed this initiative which will contribute to our awareness and primary prevention work against all forms of gender based violence which affect thousands of women and girls in Scotland and millions worldwide. Giving men an opportunity to get involved and speak against all these forms of violence is crucial if we want shape a fairer and safer society for our children. ”