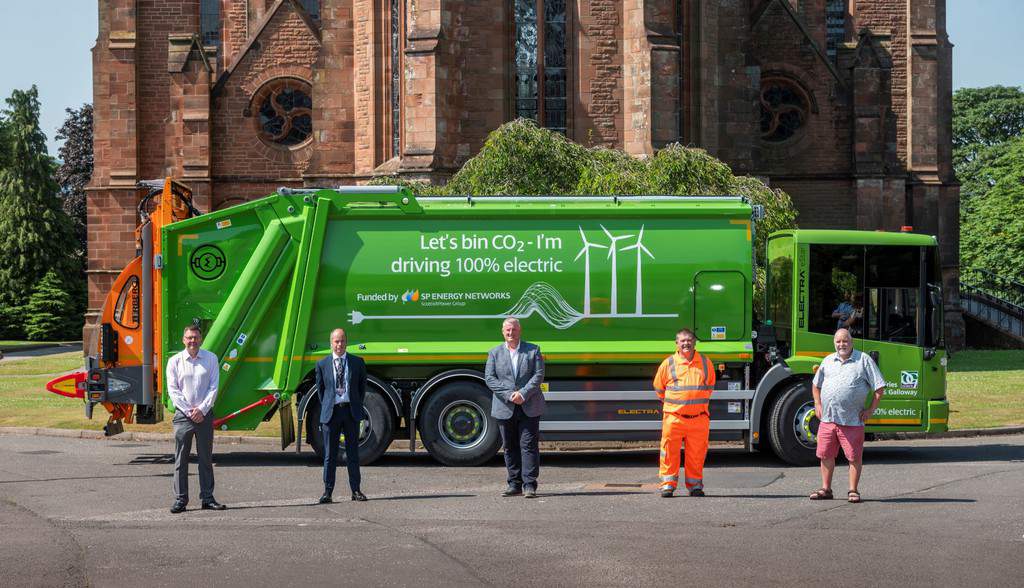 The brand-new electric refuse vehicles are the country’s first for a rural area and will be introduced onto routes serving local communities across both Dumfries and Stranraer, the two largest towns in Dumfries and Galloway. Using the vehicles to collect waste is part of the drive to reduce carbon emissions and improve air quality across the region, with the added benefit of reducing noise pollution in residential neighbourhoods.

Our Green Economy Fund was established to support the Scottish Government’s ambitious energy strategy and the drive to become net zero by 2045. In 2019, Dumfries & Galloway Council made history by passing a Climate Emergency Declaration, agreeing to reduce carbon emissions in the region to net zero by 2025.

The new electric vehicles, manufactured by Electra Commercial Vehicles at their factory in Blackburn, England encompasses a battery size of 287KW which will give the vehicle a range of approximately 100 miles over 12 hours of operation, enabling bin lorry operators to execute 1,500 bin lifts.

Our CEO, Frank Mitchell, said: “Dumfries & Galloway has ambitious plans to achieve Net Zero emissions by 2025, however, for that to happen there will need to be big changes. The introduction of the two new electric refuse vehicles are a sign of what’s to come in all our towns and cities eventually. Not only will they reduce carbon emissions and improve air quality, they’re a statement of intent and provide a blueprint for similar technology that will be rolled out across the region.

“We’re proud to be supporting Dumfries & Galloway Council in its bold 2025 net zero journey and helping to improve the lives of people in the communities we serve. By funding the first rural fleet of completely electric refuse vehicles, we’re determined that no community will be left behind in the journey to net zero emissions and this is just one of many ways we’re enabling that change.”

Cllr John Martin, Vice Chair, Communities Committee at Dumfries & Galloway Council, said: “Dumfries & Galloway has declared a climate emergency and set out bold targets to have net zero emissions by 2025. For us to achieve that, we need creative solutions specifically tailored to the local challenges faced by rural communities. The launch of these electric refuge vehicles shows our intent to roll out electric transport solutions across public services in years to come.

“The generous grant from SP Energy Networks’ Green Economy Fund has enabled us to commission two electric refuse vehicles for use in rural communities across the region. As a leader in the UK’s transition to net zero, Dumfries & Galloway is in a strong position to pilot green technology that has the potential to transform public services to be greener and cleaner in future years.”

So far, 35 projects have been awarded funding across Central and Southern Scotland. Find out more about the Green Economy Fund and the projects it supports here.  (opens in a new window)