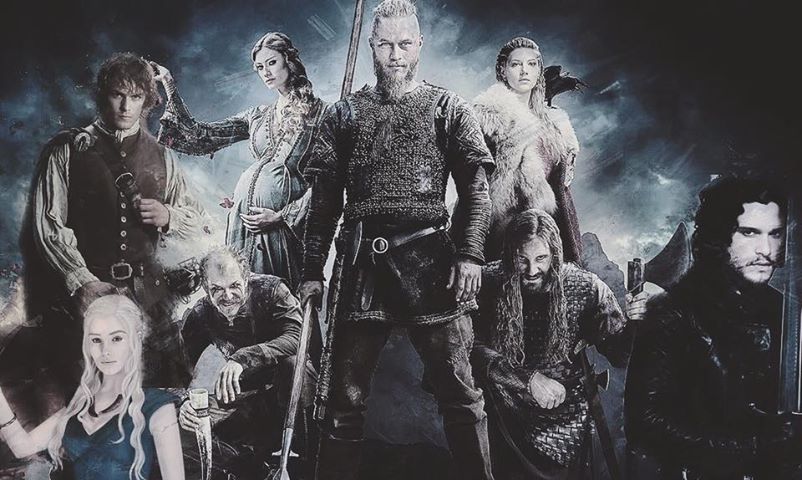 A new local heritage and history project has attracted the support of major players in the film and television industry. ‘Hidden Histories of Dumfries and Galloway’ is a ground breaking new venture from local community development social enterprise Sleeping Giants, and is being part funded by money awarded from the Heritage Lottery Fund.

The Hidden Histories programme of activities and events, centering around Lincluden Collegiate Church (or Lincluden Abbey), and Twelve Apostles Standing Stones, is being developed and delivered with leading creative production professionals working on hit TV shows Vikings, Game of Thrones, and Outlander, as well as local and national heritage experts.

The summer programme for the ‘Hidden Histories’ project is designed to re-engage people of all ages with their local and cultural history while building their understanding and opportunities to access job roles within TV/Film Industry. People from the North-West Dumfries area will be given the chance to participate in Masterclasses with prop masters, food artists, producers and costume designers, and workshops on character development, screenwriting, ancient skills and crafts, warrior bootcamps and take part in a full scale interactive ‘live action role play’ immersive adventure game, ‘The Lost Chronicles of Gallovidia’, which will bring to life the Hidden Histories of the local area, like you have never seen it before.

The Heritage Lottery Fund have awarded money to the project through the ‘Stories, Stones, and Bones’ funding for the Scottish year of history, heritage, and archaeology. The money will go towards running some specific community level engagement activities, including a local ‘Who do you think you are?’ documentary making project, a lived history project in partnership with ‘Maxwelltown Memories’, and a series of ‘quests’ into the landscape to reconnect local people with heritage relating to North West Dumfries. There will also be an archaeological project involving the new school in Lochside.

Debbie McDowall, Creative Director of Sleeping Giants said: “We are delighted to have established such incredibly strong and supportive partners who have shared our vision and helped us to develop Hidden Histories. We think Hidden Histories is a game changer as we see really unique opportunities to channel the significantly undervalued and untapped potential of our local heritage. We see it as a powerful means to help reconnect communities, building an enduring sense of community pride, aswell as helping to develop, and inspire a new workforce which will help meet a growing demand from the film and television industry for a local skilled workforce to support productions. It’s an ambitious, multi-pronged approach which will bring benefits to individuals, the wider community, and the regions’ economy, with the outcomes being brand new training and employment opportunities, and a fresh new cultural tourism offer for the region.”

Frances Halpin, Head Food Designer on ‘Game of Thrones’, is helping to bring the project to life by leading a hands-on Masterclass in period food styling, and creating Game of Thrones and Vikings inspired banquets for Hidden Histories events over the summer. Speaking about the potential of the project, Frances said: “The Hidden Histories of Dumfries and Galloway project is a fantastic base from which young learners can explore and try out new skills in an exciting new environment. The great thing about the film industry is the range of jobs needed on a production; skilled film operatives, costume, hair and makeup, production design, set building carpenters, plasterers, electricians etc… I am very excited about this project and can’t wait to share the skills and knowledge that I have gained over the years, helping to set up networks between the Hidden Histories participants and the industry leading professionals I currently work with in the film industry, and seeing the change that will come from us sharing our skills and insights into our craft and career experiences.”

Hidden Histories of Dumfries and Galloway will launch its summer programme in conjunction with the ‘Creative Futures’ initiative at a free launch event on Thursday 29th June, 6-8pm at the Abbey Inn, and Lincluden Abbey. The project is working in partnership with The Stove Network, Dumfries YMCA, and Heritage Environment Scotland, who have stated that “continued access and enjoyment of Lincluden Collegiate church and surrounding monuments are of great importance.”

The project has seen Lincluden Abbey nominated as the location to represent Dumfries and Galloway in the 2017 “Dig It: Hidden Gems” competition. To vote for the Abbey, check the ‘Dig It 2017’ Facebook page.