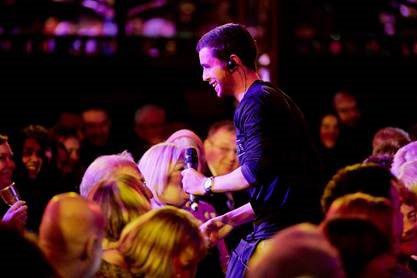 A Kirkcudbright man, who helps promote and organise some of the biggest events in Dumfries & Galloway’s calendar, is helping inspire other young people to consider a career in tourism and hospitality.

22 year old Jack Finlay is sharing his story as part of a new digital campaign by VisitScotland called Future Focus.

Created as part of Scotland’s Year of Young People 2018, the campaign, which launches today, is highlighting the valuable role of young people in the country’s thriving tourism and hospitality sector.

From chefs to tour guides, event organisers to marketeers, a series of specially-created videos and blogs throughout the year, will share the stories of those helping ensure Scotland is a must-visit destination.

Having initially dreamed of becoming an actor, Jack successfully completed an internship and Creative Modern Apprenticeship, before his hard work landed him the role of Associate Producer helping produce major events such as the Big Burns Supper.

The events and festival sector has opened so many doors for Jack, he said:  “There are people who are culturally and artistically active everywhere in Scotland. Its event calendar is absolutely rammed week by week, 365 days a year. I come from a small fishing town but it is absolutely buzzing with cultural activity. Scotland opens its arms to art and culture and embraces it. If you want to get involved in events and festivals you just need to take a look at your surroundings as there are opportunities to get involved everywhere.”

Scotland’s tourism industry accounts for approximately 217,000 jobs across 14,000 tourism businesses. Every £62,000 spent by visitors supports one job across Scotland’s economy.

Paula Ward, VisitScotland Regional Leadership Director, said: “Jack is a fantastic young tourism ambassador and we are delighted to share his story as part of Future Focus. He has shown that with hard work and dedication you can really play a vital part in supporting local tourism, leaving visitors with lasting memories of their time here.

“Throughout the Year of Young People 2018 we have been celebrating the astounding talent and priceless contributions of those aged 8-26 years old. We want to inspire the next generation to choose tourism as a career and join this fast-paced, exciting and vibrant industry which is the heartbeat of the Scottish economy.”

Tourism businesses across Scotland are now being urged to shine a light on their own young rising stars and join the conversation on social media using #FutureFocus and #YOYP2018.