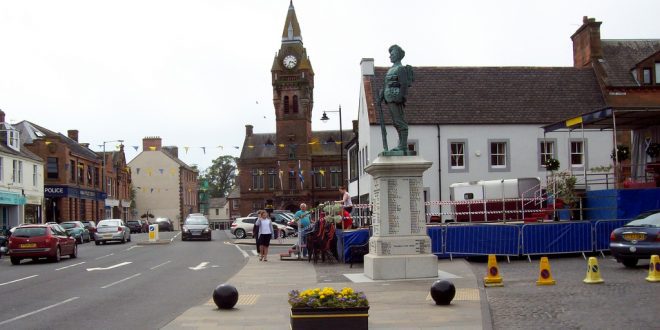 Police Scotland officers in Annan are seeking witnesses to what appears to be an unprovoked attack on a 26 year old man from the town as he sat on his motorcycle at a red light at the traffic lights in the town on Tuesday 28 February 2017.

The man was seated on his motorcycle, a black coloured Honda 125 at the traffic lights at the junction of High Street and Bank Street, opposite Downies Wynd at around 1.15pm  when a man walked from the pavement and kicked his motorcycle knocking him over onto to the ground with the motorcycle landing on top of him.

The attacker then proceeded to kick and punch the victim while he was on the ground, and then walked off up Downies Wynd. The victim was left bruised and shocked at the attack and was helped from the road way by a passing woman who had also phoned the police.

Constable Sarah Smith at Annan said “this was a horrific attack in broad daylight in the centre of Annan at a busy lunchtime. We are following a positive line of enquiry however we are appealing for anyone who saw this attack to contact us at Annan to help us with this investigation. The victim received bruising and grazing as a result of being assaulted and was also left in a shocked and distressed state. Anyone with any information should contact us at Annan on 101.

Lone Piper & Alexander Mccall Smith’s Songs Of The Saints To...