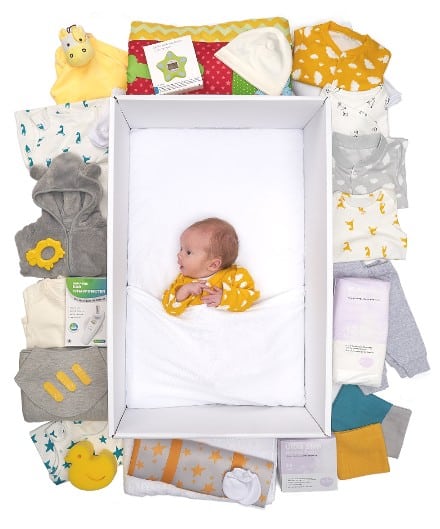 Uptake jumps to 96% as 80,000 deliveries made to parents. The new Baby Box design, created by a team of children and young people, has been unveiled. 1916 Total baby Boxeshave been delivered by Dumfries and Galloway Health Board across the region since launch, until 17 March 2019.

The new design features iconic landmarks such as Ben Nevis, Glenfinnan Viaduct and Edinburgh Castle.
It comes as research shows that 80,873 Baby Boxes have been delivered since they were launched in August 2017, when demand was 85%. In the third quarter of 2018, demand for Baby Boxes from expectant parents soared to 96%.

From hundreds of entries from a nationwide Young Scot competition celebrating the Year of Young People, the winning design was created by:
• Demi Burnett, 12, from Banff Academy in Macduff.
• Edith Macdonald, 13, from the Community School of Auchterader in Gleneagles.
• Emily Wilson, 15, from St Luke’s High School in Barrhead.
• Holly Henry, 16, from St Columba’s in Kilmacolm.
• Sonny Robertson, 17, from Trinity Academy in Edinburgh.

The winning team received an award from Children’s Minister Maree Todd at the APS distribution centre in Leith where the boxes are printed, filled and sent out to expectant parents.

In addition to the redesign, the box will encourage families to become more environmentally friendly, with parents-to-be receiving a voucher for a reusable cloth nappy and liners from Glasgow-based company Tots Bots.

Ms Todd said:
“We are committed to giving every child the best start in life, and we do this by ensuring that every family with a newborn has access to essential items needed in the first six months of a child’s life through the Baby Box. 96% of expectant parents are requesting a Baby Box – a big rise on the 85% since they were first launched – and we have now delivered more than 80,000. That’s a huge vote of confidence in Scotland’s Baby Box.

“This new design – by children for children – is impressive in its detail and creativity. Parents have also told us that they love personalising their Baby Box, and as a result my favourite idea from the winning team is the free space left around the trunk of the tree on the lid to allow the family to add their newborns’ hand and foot print.

“It will touch the hearts of many parents that children from across the country have worked together, investing so much time and effort, into creating something truly special for their babies. I’ve met many families who have treasured their Baby Box and I can’t wait to see the new boxes in homes for years to come.”

Louise Macdonald, Chief Executive of Young Scot, said:
“It is wonderful that a new generation of young Scots will be welcomed into the world with a beautiful Baby Box designed by today’s young Scots. I am delighted that 100,000 of these boxes will spark joy in households across the country over the coming years, and I thank every young person who has been involved in their creation.”

Jackie Brock, CEO of Children in Scotland said:
“The quality, creativity and skill shown by all the children and young people who entered the design competition was breath-taking. Each submission demonstrated what a great opportunity the Baby Box provides for showing what is special about being born and growing up in Scotland.
“Families will be really delighted with this addition to their baby’s welcome. Once the baby and their friends are old enough to colour it in, it will make a wonderful toy and memory in future years.”

Scotland’s Baby Box contains a selection of clothes from newborn up to the age of six months, as well as every day must-haves, like a bath towel, a travel changing mat, muslin cloth squares, a bib and a digital thermometer. Every Baby Box also comes with a number of books which parents and children can read together.
Contacts

The Baby Box was launched on 15 August 2017, providing new parents with essential items from birth to six months. Parent Club is an online community created by the Scottish Government to provide parents and carers with support throughout their child’s early life and beyond. More information on the Baby Box can be found at https://www.parentclub.scot/

Fiona Smyth, Founder of Tots Bots, said:
“We are so thrilled to have been chosen by the Scottish Government to supply the reusable nappy scheme voucher in the new Baby Box. With over 8 million disposable nappies going to landfill in the UK every day – taking up to 500 years to break down – our soft cloth nappies have never been so popular. We can’t wait to be helping more families in Scotland than ever before through the Baby Box scheme take their first steps towards becoming more environmentally-friendly.”

“I was very privileged to be asked to be involved in the Design Competition for the new Baby Box. It was a delight and an honour to be involved in both the Design Jam and mentoring at every stage of the process. The thinking and design ideas presented by the young people was well beyond their years with them all showing such great determination and creativity.”