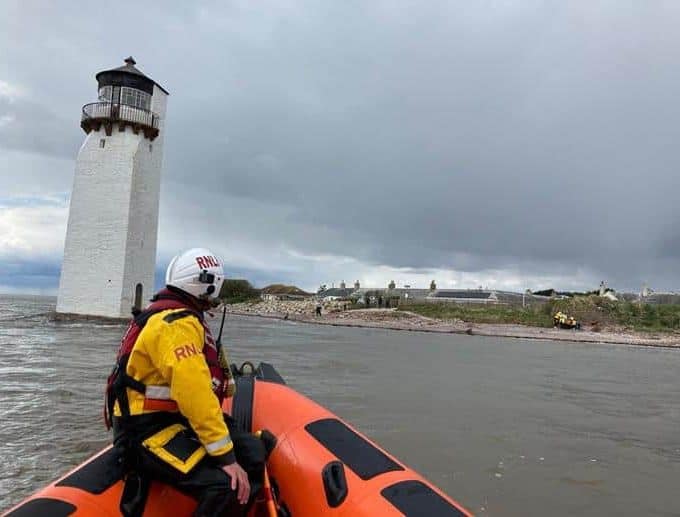 In a Dramatic rescue, the RNLI saved a fisherman stranded on rocks, surrounded by sea approximately 400 yards off Southerness.

Silloth RNLI lifeboat was called out on Thursday 29 April to a fisherman stranded on rocks, surrounded by sea approximately 400 yards off Southerness.

The RNLI lifeboat made excellent time covering the distance in 11 minutes and found the casualty in seawater. One crew member went into the sea to rescue the fisherman and took him back to the lifeboat, where he was given a survival bag along with a lifejacket.

The senior helm Steve Henderson manoeuvred the lifeboat carefully around the rocks, while crew members used a dipstick to measure the depth of the sea. The casualty was taken to Southerness Beach where he was looked after and treated by two crew members as he’d been in the water for some time until assistance arrived. An ambulance was on its way to the scene.

The lifeboat left the casualty with the Coastguards, having to leave due to the rapid ebbing of the tide and returned to station

Key facts about the RNLI

The RNLI charity saves lives at sea. Its volunteers provide a 24-hour search and rescue service around the United Kingdom and Republic of Ireland coasts. The RNLI operates over 238 lifeboat stations in the UK and Ireland and, in a normal year, more than 240 lifeguard units on beaches around the UK and Channel Islands. The RNLI is independent of Coastguard and government and depends on voluntary donations and legacies to maintain its rescue service. Since the RNLI was founded in 1824, its lifeboat crews and lifeguards have saved over 142,700 lives.