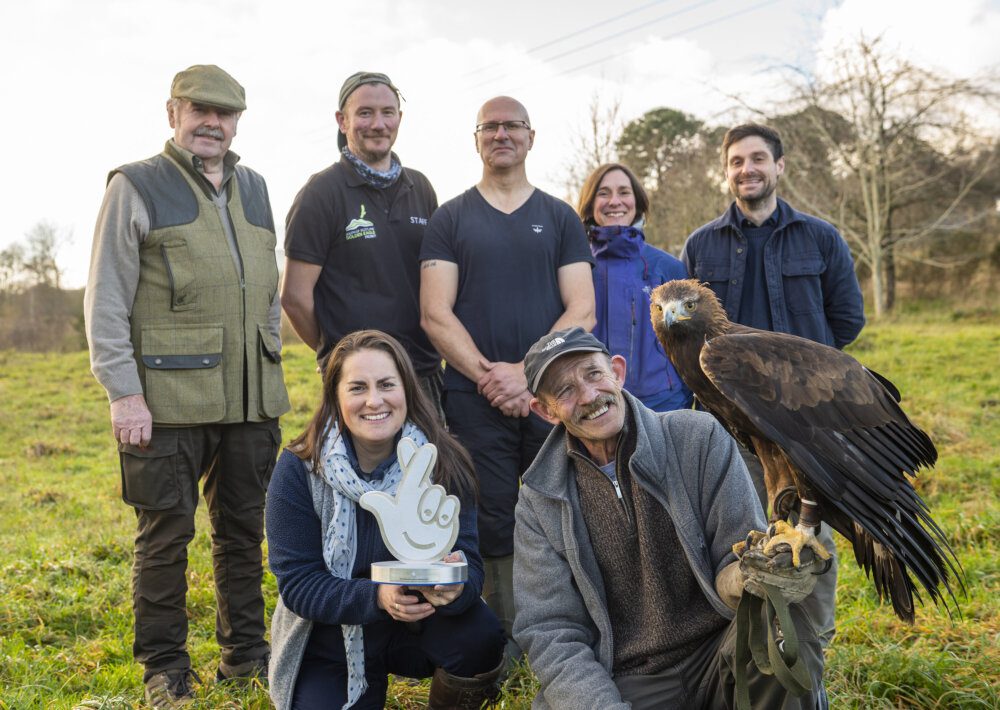 The Moffat Based South of Scotland Golden Eagle Project has been named Scottish Project of The Year in the 2022 National Lottery Awards.

Through a series of ground-breaking golden eagle translocations, the project is addressing a previously low population of golden eagles in Dumfries and Galloway and Scottish Borders. Starting out with three breading pairs in 2018, the project has brought the total population to 39, the highest number recorded in 300 years.

The South of Scotland Golden Eagle Project beat off stiff competition from more than 1300 organisations to reach the public voting stage in this year’s National Lottery Awards, which celebrate the inspirational people and projects who do extraordinary things with the help of National Lottery funding.

The project has emerged as the Scotland winner following the public vote which was held earlier this year.

“From taking the local population of golden eagles to the highest number recorded here since the early 19th century and building a growing appreciation of the importance of golden eagles to sustainable rural conservation management, to creating the UK’s first Golden Eagle Town and Festival in Moffat and opening the first mainland Eagle Information Point in Philiphaugh, the work of the project team really is exemplary. And we’re incredibly grateful to the players of the National Lottery and all our funders for making all of this possible.”

Project Manager, Cat Barlow, added: “It is such an honour to win this prestigious award, a wonderful recognition of the fantastic support the project has received from National Lottery players, volunteers, communities, stakeholders and project partners.”

Jonathan Tuchner, from The National Lottery, added: “Golden eagles are iconic to Scotland. It’s exciting to see the numbers being boosted in their natural habitat thanks to the innovative work of the South of Scotland Golden Eagle Project, supported with funding raised by National Lottery players. It’s thanks to the project’s ground-breaking achievements that they have deservedly won the public vote to be crowned the 2022 National Lottery Awards Scottish Project of the Year.”

Earlier this year, the project reached a new milestone as six more chicks were relocated to southern Scotland. The chicks were transported from the Scottish Highlands in September to a secret location near Moffat.

Project partners the Southern Uplands Partnership, RSPB Scotland, Scottish Land & Estates, Scottish Forestry and NatureScot worked on the project together for more than 11 years before releasing the first eagle chicks in 2018. Funded by The National Lottery Heritage Fund, project partners and the Scottish Government, the initiative is a key project under ‘Scotland’s Biodiversity. A Route Map to 2020’, supporting the Government’s ‘2020 Challenge for Scotland’s Biodiversity’.

National Lottery players raise more than £30 million for good causes across the UK every week, which in turn helps projects like the South of Scotland Golden Eagle Project continue to carry out incredible work. For more information about The National Lottery Awards visit www.lotterygoodcauses.org.uk/awards.