A team of budding engineers from Wallace Hall Academy in Thornhill have just been crowned UK & Ireland Robotics Champions. They will now be heading to America in April to represent the UK against the best robotics teams in the world. At the weekend, they competed against the UK’s top 53 other schools’ robotics teams in Bristol and came away with the Champions Award. The First Lego League is a global robotics competition, with 600 teams across the UK each year, 30,000 teams worldwide and over 250,000 participants. As UK & Ireland Champions, the team, called ‘GLIC’ (Gallic for ‘wise’) can now compete at the World Robotics Festival in Detroit. 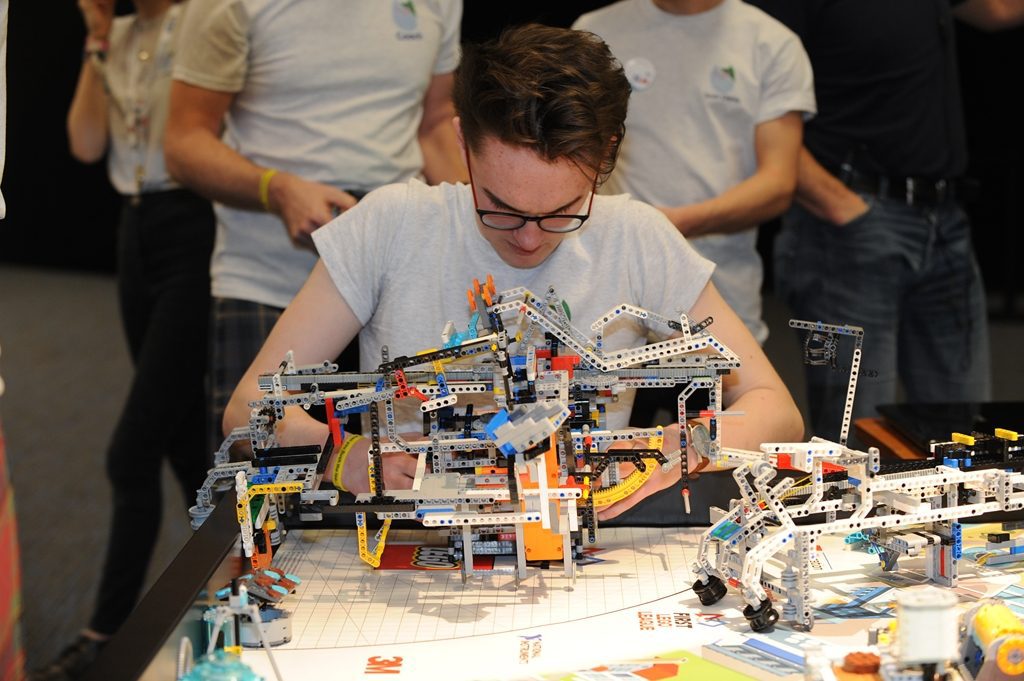 Barry Graham, Headteacher of Wallace Hall School, said ‘We are thrilled at the accomplishment of ‘GLIC’. Our Design & Technology department have been building a national reputation in the robotics world and the opportunity for Wallace Hall students to compete in America on a global stage is exciting for the whole school community’.

Eleanor Burns, one of GLIC’s eight team members said ‘Unusually for the engineering world, our team is made up mainly of girls. As well as producing a spectacular robot, our competition involved developing an invention along the theme of how humans interact with water. Our proposal is a unique system to heat the home through re-harvesting already wasted energy. We were thrilled to learn that we have also been nominated by the IET, the Institute for Engineering & Technology, for a ‘Global Innovation Award’ for this. We may also be travelling to California in June to present this at a separate event’.

The team are made up of Eleanor Burns, Lauren McKinna, Scott Clancy, Greig Dunbar, Bethany Nicholson, Faith Goodburn, Hannah Ogilvie and Lois Geddes. ‘We could not believe how big the UK & Ireland Final was’ explained Bethany. ‘The older team members had said it was huge because they were there last year, but until we arrived we didn’t quite get it.  When we saw there were TV cameras, commentators and people getting interviewed, my heart was in my mouth, but I knew I needed to keep things together so I didn’t let the team down. It was only afterwards that everyone else said they felt the same way! To win was unbelievable. We have had such an adventure so far and can’t wait to represent Dumfries & Galloway, Scotland and the whole UK in America ’.

Neil Corrigan, Principal Teacher of Design & Technology explained ‘Normally, the UK and Ireland Champions are fully funded to attend the World Festival in America. However, this year this has been cut significantly. Consequently, we need to find funds to get us there.  Last year we were helped to compete at international level by The Holywood Trust, Leli and Thornhill Rotary Club and we have every faith that the people of Dumfries and Galloway will help get the team to America. We have been putting a plan into action to raise the funds we need, and would welcome any donations or sponsorship by local companies’.

James Lees, Teacher of Design & Technology explained more. ‘The World Robotics Festival is an enormous event in the USA, attended by Google, Apple and other household IT companies. To give a sense of its scale, one event will be held in the 60,000 seat ‘Ford Field’, home of the Detroit Lions NFL American football team. It is high profile, but we like to be noticed. We celebrate our ‘Scottishness’, with kilts and tartan as part of our team uniform, so we stick in people’s minds! Please contact Neil or myself at Wallace Hall Academy for further information about sponsorship, or visit the school website for a link to our Justgiving page’.

GLIC aim to compete at the World Robotics Festival in Detroit, Michigan from 25th to 28th April this year.  It will be streamed live across the globe so you can watch from home.

Wallace Hall Academy are trying to raise £15,000 so the team can represent Scotland and the UK at the World Robotics Championship  in Detroit, USA. If you would like to donate  their JustGiving page can be found HERE.