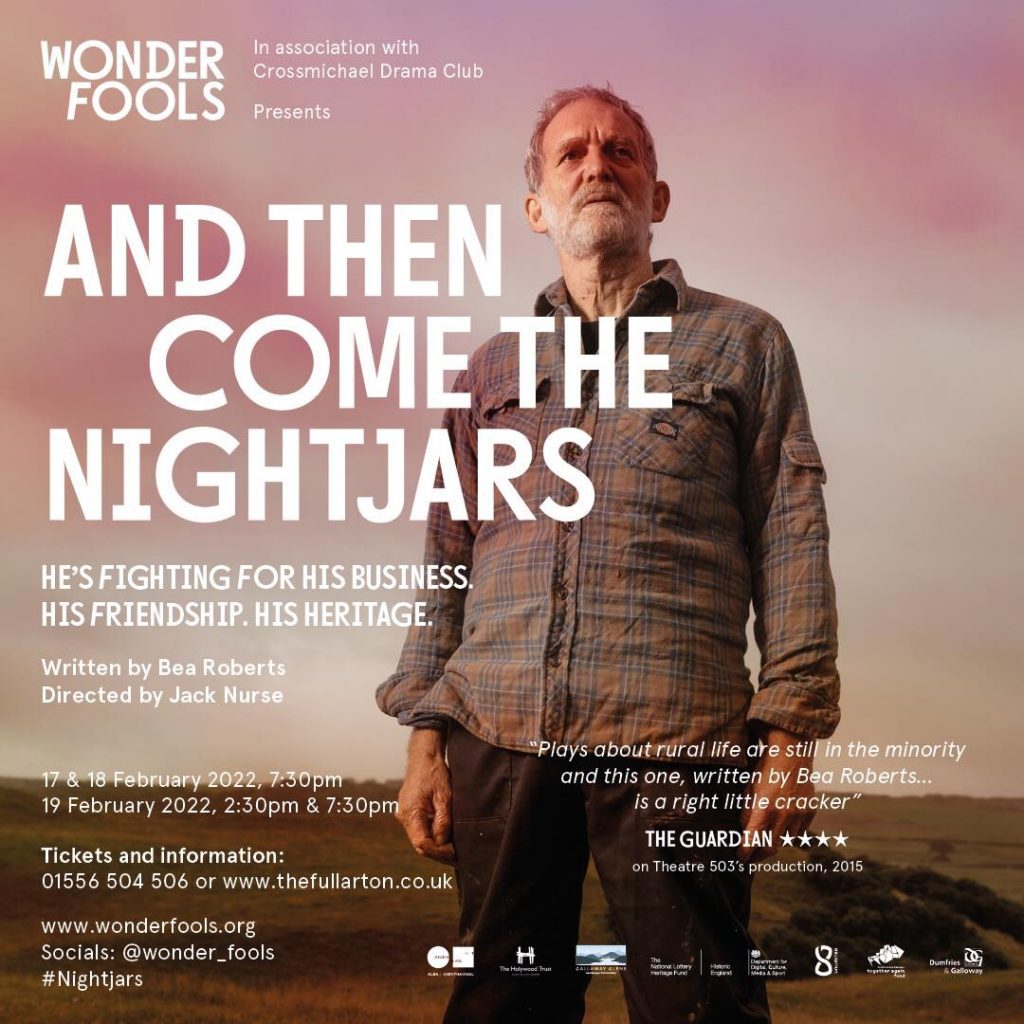 Theatre company and charity Wonder Fools in collaboration with Crossmichael Drama Club present And Then Come the Nightjars by Bea Roberts, a stage play taking place in February 2022 at The Fullarton Theatre, Castle Douglas.

This award winning play is a story of friendship against the odds and a tribute to a vanishing way of life. Set against the backdrop of the 2001 foot-and-mouth epidemic, it charts the struggle of one dairy farmer amidst the crisis that saw the slaughter of four million animals and the postponement of a General Election. Pyres are lit on the horizon and Michael is trapped as his farm becomes the battleground for his business, his heritage and his friendship with local vet Jeff. Ten years on and the battle scars are as evident on their relationship as they are on the landscape.

Originally set in Devon, Wonder Fools and Crossmichael Drama Club (winners of Nation’s Best Am Dram Award from Sky Arts in 2012) have joined forces to relocate the play to Dumfries and Galloway, one of the hardest hit areas. This impressively well-made play shows the impact on people and communities that the mismanagement of a crisis can have. Especially relevant today as we begin to recover from the tragedy and trauma of Covid-19.

Directed by Wonder Fools Co-Founder Jack Nurse, the production will be created by a professional creative team most of which are from Dumfries and Galloway including composition by local performance duo VanIves, design by Jenny Booth and movement direction by Emma Jayne Park.

Tender, frank and funny, the play was joint winner of the inaugural Theatre503 Playwriting Award, and premiered at Theatre503, London, in September 2015, before transferring to Bristol Old Vic.

“We are especially happy to revisit this wonderful play with Jack, and this time with the backing of his theatre company Wonder Fools. The creative team are all experienced young theatre professionals, all originally from the area, so we look forward to trying our best to keep up” – Crossmichael Drama Club

“Plays about rural life are still in the minority and this one, written by Bea Roberts…is a right little cracker” – ★★★★ The Guardian on Theatre503’s production, 2015

“One of the most vibrant young companies to emerge onto the Scottish theatre scene in recent years” – The Scotsman on Wonder Fools, 2021

“A formidable piece of popular small-scale touring theatre in the 7:84 tradition, educating working class audiences across Scotland about their own history, while providing a superb night out’ – ★★★★

The production sits alongside an ambitious outreach programme aiming to provide young people from Dumfries and Galloway with paid work to kickstart careers in the arts. Wonder Fools have worked with the Royal Conservatoire of Scotland’s Widening Access to the Creative Industries department in delivering ten paid apprenticeships in directing, set & costume design, composition, stage management, movement direction and lighting. More information on this and how to apply can be found here: www.wonderfools.org/nightjarsworkshops

Wonder Fools are also creating a digital archive to accompany the production. The D&G Living Archive will be launched online in late November and will feature sound recordings of interviews with local people, as well as photographs and other materials submitted by the public, This will be an on-going project and the company are inviting the community of D&G to submit their memories of the foot-and-mouth crisis. The archive will also be produced as a digital exhibition at the venue for audiences to explore before and after the show. More information on the archive and how to submit can be found here: www.wonderfools.org/nightjars-archive

“I first directed this play with Crossmichael Drama Club in 2017 and was struck by how relevant it’s subject matter still was to the local community. It’s for this reason that we are bringing it back, and I think it will have more resonance than ever as we recover from the pandemic. This production has a local professional creative team collaborating with Crossmichael Drama Club to take the piece to even greater heights. Plays about rural life are rare so we are keen to engage as many of the local community as possible as audience members but also in the creation of the production and the archive. I am from Kirkcudbright and I was lucky to have access to creative opportunities when I left school, so I’m passionate about working in the area now and creating the same kind of opportunities for others. That’s why we have created six paid apprenticeships for the production and we are excited to help young people gain paid experience and learn new skills. This is the first of several projects in the region and we can’t wait to get started!”

Christmas Lights Switch On Returns To DGRI After Three Years