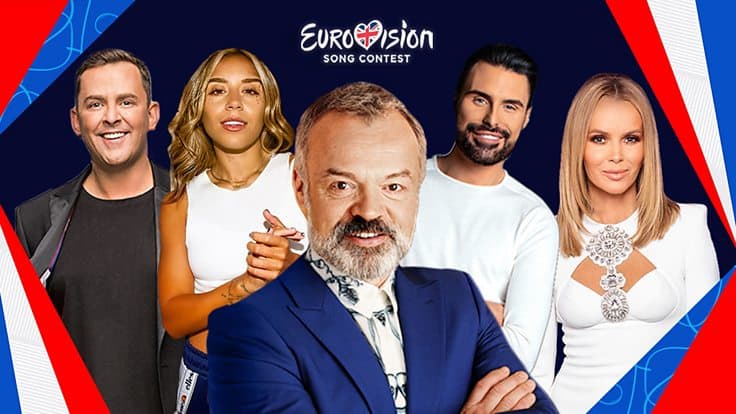 Graham Norton will return for the Grand Final on BBC One, produced by BBC Studios, where he will be commentating live from Rotterdam. While Ken Bruce will continue his long-running coverage over on BBC Radio 2.

Grammy-nominated singer songwriter and presenter, Chelcee Grimes will be joining Rylan Clark-Neal and Scott Mills for the semi-finals live on BBC Four. Presenting live from London, they will oversee proceedings as 33 countries compete for their place in the Grand Final. The semi-finals will air on 18 and 20 May on BBC Four, with UK viewers able to vote in the second semi-final on 20 May.

Graham Norton returns for his 12th Eurovision Song Contest on BBC One. After commentating last year on Eurovision: Europe Shine a Light, he will return to his coveted post for this year’s live Grand Final.

Actress and singer, Amanda Holden will be taking the reins of the Eurovision Spokesperson, where she will be delivering the results of the UK professional jury vote live from London. She follows in the illustrious footsteps of Nigella Lawson, Mel Giedroyc, Richard Osman, Alex Jones, Cheryl Baker, Katrina Leskanich from Katrina & The Waves, and Lorraine Kelly.

The last Eurovision Song Contest Grand Final to be broadcast on BBC One in 2019 was the most watched music programme on the BBC that year and it was the most popular music TV show of the year amongst 16-34s.

Multi-platinum selling, Brit award-winning and Grammy nominated singer-songwriter James Newman will be representing the UK with his single Embers, released by BMG after the renewed collaboration with BBC Studios for the contest.

This year the Eurovision Song Contest will be broadcast live from Rotterdam, after the competition was cancelled in 2020 because of the Covid-19 pandemic.

Graham Norton says: “I’m so excited for Eurovision to return, after the past year we’ve had it’s exactly the kind of joy the world needs. The UK have a great entry with James Newman and Embers, it’s a banger and represents everything that Eurovision is. It’s arguably the best night of the year and I can’t wait – bring it on!”
Ken Bruce says: “Radio 2 is getting right behind Eurovision 2021 with shows galore to delight all the fans. We’re all so delighted the competition is back this year. On the night I’ll be presenting the live show from my hot seat at Wogan House – bringing listeners all the entries, all the drama and, of course, the ultimate winner! Will it be the UK’s year to finally win again? I can’t wait to find out!”
Rylan Clark-Neal says: “There was a big Eurovision shaped hole in my life last year, so I am super excited to see what everyone brings to the table for 2021 – it’s the best time of the year! I am looking forward to being reunited with Scott for the semi-finals and to welcome Chelcee to the team! Plus Embers is an absolute tune – I can’t wait!”
Scott Mills says: “Eurovision week is my favourite of the year and I cannot wait for the biggest entertainment show on the planet to return! Although we won’t be in Rotterdam ourselves, Rylan, Chelcee and I will definitely make sure we’re still throwing the ultimate can’t miss celebration for this year’s semi-finals”
Chelcee Grimes says: “I am super excited to be joining the Eurovision family, I can’t wait to host the semi-finals alongside Scott and Rylan, it’s going to be awesome. I have always been a fan of Eurovision, and I can’t wait to be a part of it. I’m looking forward to seeing all the weird and wonderful performances, as well as cheering on my mate James who is waving the flag for the UK! James and I have written together for a previous Eurovision winner and we’ve also penned some songs for the Romanian entrant so he is the best person for the job. JAMES TO WIN!”
Amanda Holden says: “What an honour to announce the UK’s votes this year. I’m utterly thrilled. It’s an ambition ticked after 45 years of watching it! Now, what to wear…”

Today marks the launch of one of our social videos, called Ready, Steady, Eurovision, featuring Rylan Clark-Neal, James Newman and TV icon, Rustie Lee. Rylan talks through his favourite Eurovision performances, whilst Rustie cooks up some classic Dutch dishes. Coming later this month we’ll launch Eurovision and Chill on our social channels, where Lady Leshurr and Rob Rinder watch some of this years entries and give their expert opinions. These will be available via Twitter (@bbceurovision) Instagram (bbceurovision) and Facebook (BBC Eurovision).

The BBC’s Eurovision coverage is a BBC Studios production, commissioned by Kate Phillips, Director of Entertainment. The Executive Producer and Head Of Delegation is Andrew Cartmell, and the series producer and Assistant Head of Delegation is Lee Smithurst. Suzy Lamb is the MD for BBC Studios Entertainment and Music and Mel Balac is the Creative Director. The Commissioning Editor for the BBC is Rachel Ashdown.