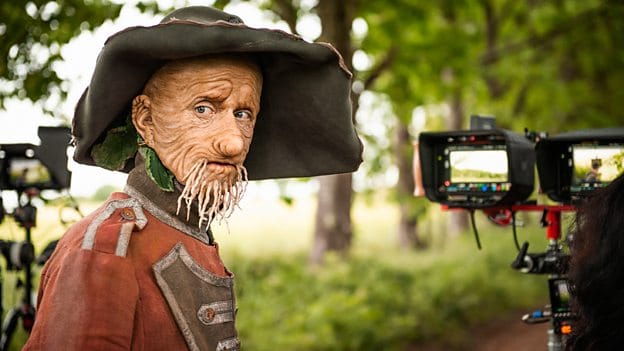 A dazzling, modern adaptation of Worzel Gummidge comes to BBC One in two hour long films, inspired by the classic books of Barbara Euphan Todd This Christmas.

Detectorists actor Mackenzie Crook writes, directs and stars as Worzel Gummidge. Leopard Pictures, part of Argonon Group, are partnering with Treasure Trove Productions and Lola Entertainment to bring these glorious stories to life for an audience of all ages. The films have been commissioned by Shane Allen, Controller Comedy Commissioning for the BBC, and Charlotte Moore, Director of Content for the BBC.

The first 60 minute episode, The Scarecrow Of Scatterbrook, sees two young strangers arrive in the village of Scatterbrook. It’s not long before Susan and John encounter Worzel Gummidge, the Scarecrow of Ten Acre Field. Their world is sent spinning into confusion when they realise Gummidge comes to life. The only person more shocked is Worzel, when he discovers that the children are not in fact fellow scarecrows but humans.

Their worlds should never commune but fate has conspired to create an extraordinary union. The seasons have stopped and the harvest hasn’t arrived. The rhythm of the natural world is out of kilter and this unlikely trio must try to put it right. Magic, mystery and mayhem unfurl.

The second episode, The Green Man, welcomes another mysterious arrival to Scatterbrook. The Green Man is the creator of scarecrows and keeper of scarecrow lore. He isn’t at all happy that Worzel is consorting with humans. Elsewhere, local aristocrat Lady Bloomsbury Barton is holding a fete, with a Scarecrow competition that Worzel is determined to win. What will Worzel’s most competitive rival, Soggy Bogart, and The Green Man make of it all?

Mackenzie Crook says: “I’m thrilled to be back working with the BBC and many members of the Detectorists team to bring Worzel Gummidge to a new generation of viewers and reintroduce him to old friends. Adapting Barbara Euphan Todd’s books into these two films has been a joy and I’ve completely fallen for her charming, irreverent scarecrow. Fingers crossed for a glorious English summer as we head out to Scatterbrook Farm and Worzel’s Ten Acre Field.”

Shane Allen, Controller Comedy Commissioning at the BBC, says: “Mackenzie’s widely adored and multi-Bafta award winning Detectorists was a grown up love letter to bucolic England and with Worzel he takes a similar approach to English folklore, rural rites and the magic of childhood. His visionary and fundamental reinterpretation of this classic is that rare and special achievement – a BBC One family friendly comedy.”

Kristian Smith, Executive Producer for Leopard Pictures, says: “These two specials are real treat pieces for a family audience. There was nobody other than Mackenzie that I wanted to work with on this. The vision and creativity of this man is awesome. He has written two beautiful scripts that are clever, warm and funny. And once again he has attracted a formidable cast of tremendous actors. We are so excited to be able to bring these new Worzel Gummidge stories to everybody.”

The full scheduling of the BBC Christmas programmes is expected to be announced in early December.

Worzel Gummidge is written and directed by Mackenzie Crook and is a Leopard Pictures, Treasure Trove Productions and Lola Entertainment production for BBC One. It is Executive Produced by Kristian Smith for Leopard Pictures, Lisa Thomas for Lola Entertainment and Mackenzie Crook for Treasure Trove Productions, with rights holders Patrick D. Pidgeon and Eric S. Rollman executive producers for Pidgeon Entertainment, Inc. It is produced by Georgie Fallon and Alex Moody is the Commissioning Editor for the BBC.