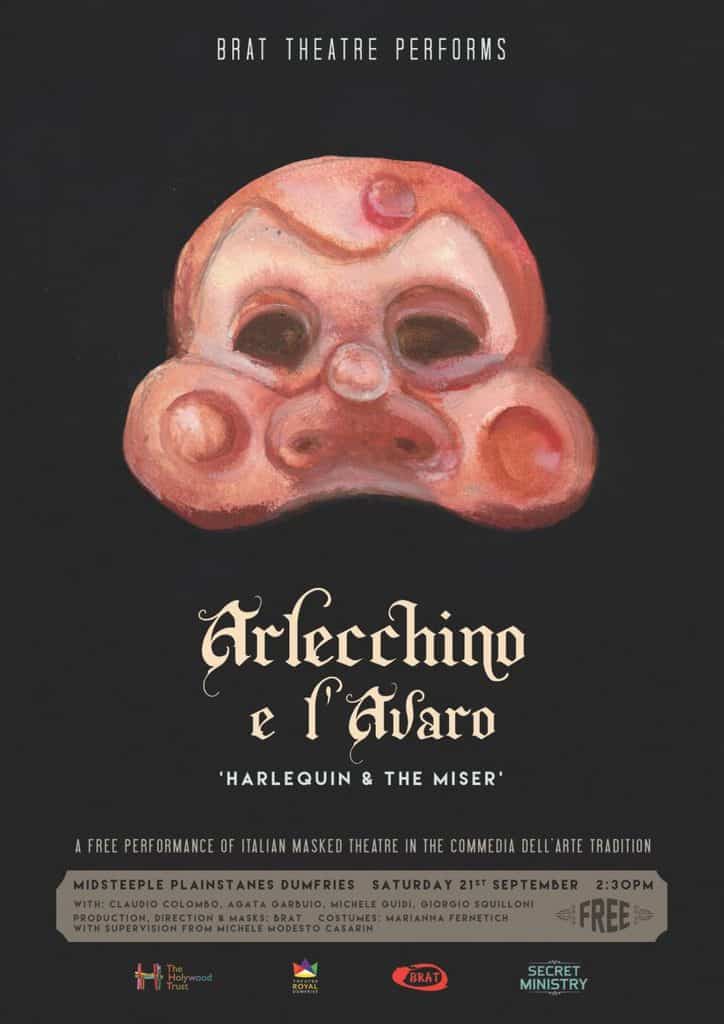 The World premier of Arlecchino e l’Avaro (Harlequin and the Miser), a new and original play written and performed by Italian Theatre Company, BRAT will be performed on Saturday 21st September, at the Planestanes, Dumfries. 2.30 pm and will be FREE for everyone to watch.

As a prelude to the performance, members of BRAT; Agata Garbuio, Claudio Colombo, Georgio Squilloni, Michele Guidi, will be giving classes at the Theatre Royal Dumfries daily from 16th. to 20th. September. Classes are an introduction to Commedia dell’Arte and masked theatre.

Classes are aimed at school groups, youth theatre groups, young people interested in performance, and drama group leaders and teachers. There are spaces available for anyone interested who would like to come along. Please contact Heather Molloy at Theatre Royal for the dates and times of classes that would suit you.

Classes and performance are supported by the Holywood Trust and the Theatre Royal and are free.

Arlecchino el’Avaro is a Commedia dell’Arte play in the traditional of Italian masked theatre. Commedia dell’Arte is one of the oldest forms of popular street theatre, using a stock of archetypal characters and situations you will recognise, including; physical comedy, dastardly swindling schemes, impossible love triangles, heroes and villains, music, mistaken identity, pompous buffoons, mysterious beauty, in fact everything you encounter every day on Dumfries High Street. Commedia dell’Arte shows us ourselves in all our conceit, vanity and glorious humanity.

Jan 23, 2020
POLICE in Dumfries are making enquiries to trace a male person after a quantity of clothing was found near to Buccleuch Street, Dumfries this...