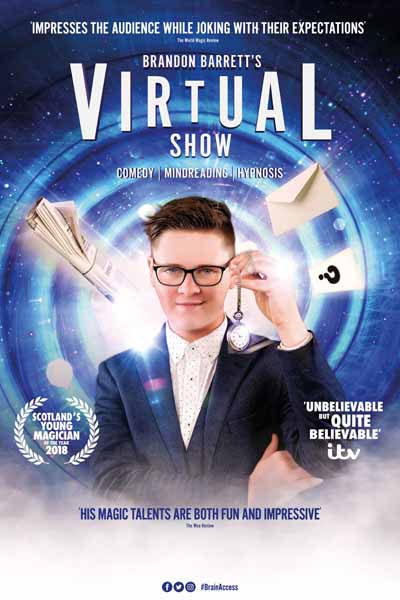 Seventeen-year-old Brandon Barrett from Dumfries is using the magic of technology to stream his live interactive mind reading show to the comfort of the publics home.

Due to the current world crisis, many freelance performers have lost all their gigs and shows for the foreseeable future, so Brandon has decided to use his social media outlets to keep people entertained with live interactive entertainment.

Brandon discovered his passion at the very young age of 7, since then he has performed over 400+ shows all over the world from taking part in a West End Showcase and also becoming a resident summer performer in Spain last year, but this year he will not be traveling the world instead he will be streaming his shows from the comfort of his outside shed.

“I think that it is import in these uncertain times to keep providing entertainment, as I think good live entertainment can whisk us away from the daily problems we face”

Whats next? Although with the current world crisis it is hard to plan for the future, Brandon is still working on new routines for his new stage show that will hopefully be touring Scotland next year, But for now he will continue to perform his “Virtual show” and in the hope he can appeal to new audiences.