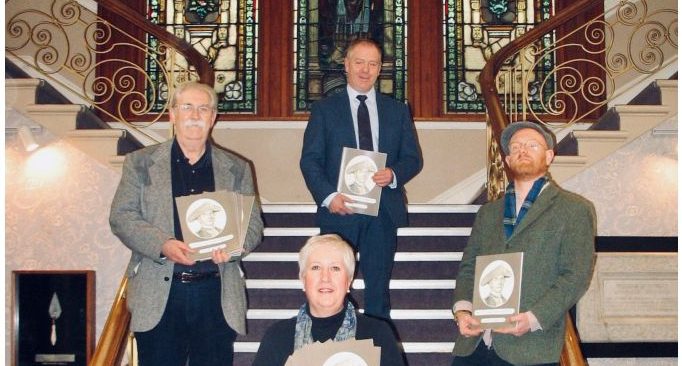 Dr Gerard McKeever and local artist/illustrator Hugh Bryden have recently handed over six hundred copies of their comic book ‘Don’t Call Me a Pirate!’ to the Dumfries and Galloway Skills, Education and Learning Department.

This resource for schools and libraries in Dumfries and Galloway graphically explores the dramatic history of John Paul Jones, a Kirkcudbrightshire sailor who was acclaimed as the founder of the US Navy during the American War of Independence. His reputation as a hero or a pirate, depending on your point of view, makes the comic an interesting and engaging read for pupils, who may be keen to explore this local connection with world history. The books are aimed at Primary 6 and 7 pupils and are being distributed to schools initially around the Stranraer and Kirkcudbright areas, and across the region’s libraries.

Dr McKeever conceived and wrote the text for this book as part of his research on literature and representations of Dumfries and Galloway. This child-friendly read explores the media’s role in the creation of identity, as well as issues of home and belonging, and is a lighter-hearted part of the work of Dr McKeever’s British Academy Postdoctoral Fellowship, based at the University of Glasgow. Funding to ensure these books are free to schools and libraries came from the British Academy, the University of Glasgow and the Galloway Association of Glasgow.