Author Shaun Baines moved to Lockerbie in Dumfries and Galloway from Newcastle Upon Tyne, Shaun’s first Novel ‘WoodCutter‘ was published in June 2018 and now he has realeased the sequel  ‘Pallbearer’. In an exclusive interview Shaun tells DGWGO all about his second novel.

Shaun Said “Originally from Newcastle, I wrote my first crime novel Woodcutter shortly after moving to a damp cottage outside of Lockerbie. It introduced Daniel Dayton, the son of a crime lord who is drawn back in to his turbulent past when his daughter Eisha is harmed by an unknown assailant in Newcastle.

I was thrilled when it was published by Thistle Publishing, but stunned when it was nominated for the People’s Book Prize. It was so well received, I thought I better write another one.”

Shaun Continued “Pallbearer is the sequel. It continues with Daniel, who is now the reluctant head of his father’s gang. He is forced into a street war with an old enemy when they decide to flood Newcastle with a new drug. Meanwhile, his daughter displays alarming behaviour and Daniel worries she is destined to follow his path into crime.

It was published by Sharpe Books, who also agreed to republish Woodcutter and give it a brand new cover. Something must have gone right because Pallbearer has already been a bestseller in the UK, Canada and Australia.

I continue to work around the Lockerbie area as a gardener. I can often be found muttering to myself while mowing a lawn as I work through the plot of my next book. I am indebted to Dumfries and Galloway for giving me the space and time to write my books and I genuinely don’t think I could have written anything without moving to the area.” 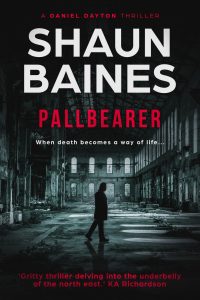 “The third Daniel Dayton book should be out by the end of the year and I’ve also been working on a mystery novel drawing on my time spent in Dumfries and Galloway.”

You can Purchase both of Shauns books on Amazon HERE and HERE. To find out more about Shaun, visit shaunbaines.com or on Twitter through @littlehavenfarm.