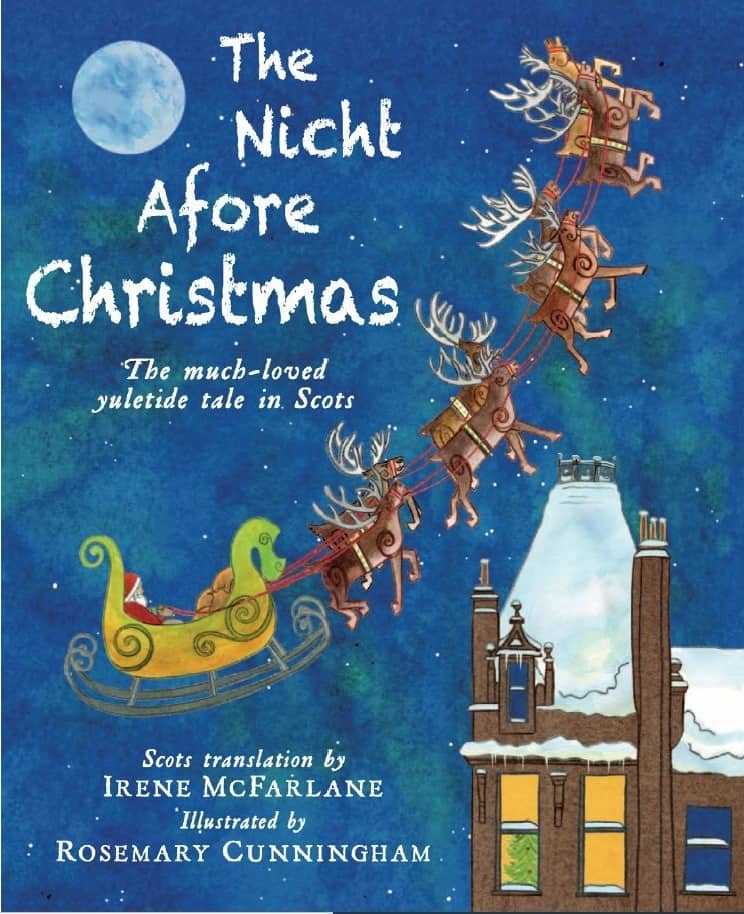 A Nicht Afore Christmas is an illustrated children’s book in Scots built upon the well-kent nineteenth-century poem, ‘The Night Before Christmas’.

‘Twis the nicht afore Christmas, whan aa through the hoose

Faither Yuletide is on his annual journey round the world and has just arrived over Scotland. One dad is in for a big surprise! Enjoy the original Christmas poem, ‘A Visit from St. Nicholas’ by Clement Clarke Moore, imaginatively translated into Scots by Irene McFarlane, and beautifully illustrated by Rosemary Cunningham. Brought to you by the publishers of The Wee Mowdie.

A Nicht Afore Christmas is an illustrated children’s book in Scots built upon the well-kent nineteenth-century poem, ‘The Night Before Christmas’. Irene McFarlane, the translator, is a Scots language user and writer, who has taught Scots language to children for forty years. Irene’s translation aims to position Scots into the centre of mainstream culture, tapping into recognisable and revered cultural products so that the Scots can be creative and playful without distancing the reader. The illustrations are by renowned Glasgow illustrator, Rosemary Cunningham. Her work is accessible and popular, with her drawings for this project setting the poem in a visually Scottish setting, to match the language – the National Trust for Scotland’s Tenement House in Glasgow.

“I live in a Glasgow tenement flat, just a three-minute walk from the Tenement House museum which inspires my illustrations for the book. I’ve worked with communities, created products, run workshops, built art, but this is my first book and it is so exciting! I am thrilled to be working with such wonderful people and to be playing a wee part in promoting Scots language by drawing the city I love.”