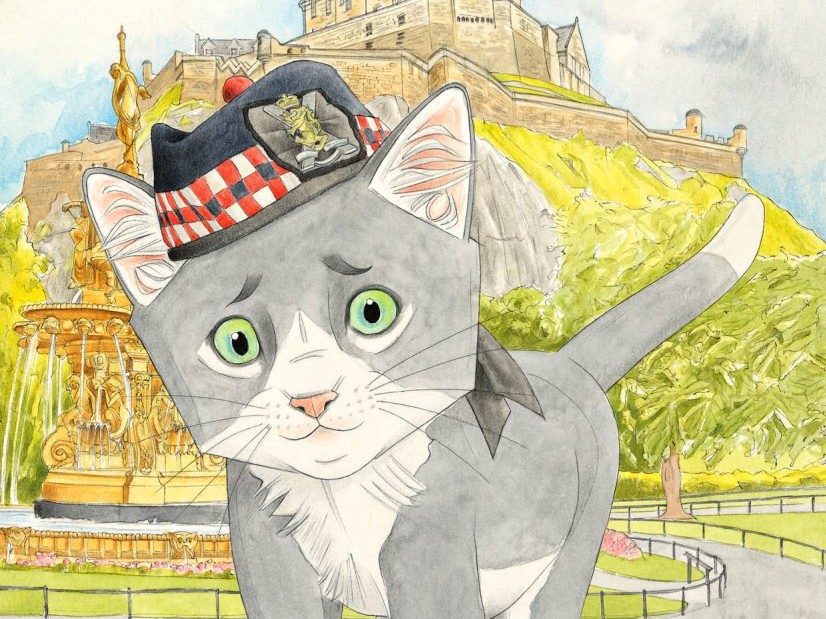 When a hungry kitten follows some soldiers in the hope of picking up a few scraps of food the adventure takes an unexpected twist – all the way to the castle in Scotland’s capital city.

The charming children’s story has been written by Alasdair Hutton who has been the ‘Voice’ of the Royal Edinburgh Military Tattoo for thirty years.

The Borders-based writer said: “I hope children will enjoy reading a simple story set in a place they might recognise. Called The Castle Cat, the tale tells of a character who first appeared in my book The Tattoo Fox. The kitten was adopted by soldiers from the Royal Regiment of Scotland while out on exercise and taken to live with them in Edinburgh Castle.” The picture book features illustrations by artist William Gorman who first worked with Alasdair on a book about Dandie Dinmont terriers called Mustard & Pepper.

Publisher and bookseller Jayne Baldwin, who runs the children’s bookshop in Wigtown, Scotland’s National Book Town said: “When I read Alasdair’s Tattoo Fox books I realised there was a story to be told about the Castle Cat and commissioned him to create what I hope will be a series. As a fan of the work of William Gorman I was delighted when he came on board as the illustrator.” The 24-page picture book features many recognisable aspects of Edinburgh Castle including the One o’clock gun and the Half Moon Battery and is now available price £7.99 from independent bookshops or directly from www.foggietoddlebooks.co.uk More from