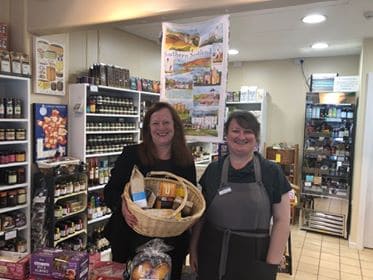 The local MSP had been visiting the businesses as part of Scottish Food and Drink Fortnight, an annual celebration of Scotland’s produce and those who grow, make, cook and sell it. She was impressed with the range, quality and choice of what’s available.

“I’ve had such an enjoyable time visiting businesses around the region and meeting some of the people involved in growing, manufacturing and selling our world-class local produce, not to mention sampling some of what’s on offer!

“Food and drink production is such an important part of our region’s economy, supporting small businesses, employment and tourism. Almost half of Scotland’s dairy production is carried out in Dumfries & Galloway and we boast world-class restaurants, ice cream manufacturers, breweries, smokehouses, fisheries, farmer’s markets and chocolatiers, so I’m keen to do what I can to support them.”

Now in its tenth year, the Scottish Food and Drink Fortnight runs until the 15th September. It is co-ordinated by Scotland Food & Drink and supported by the Scottish Government and industry partners.