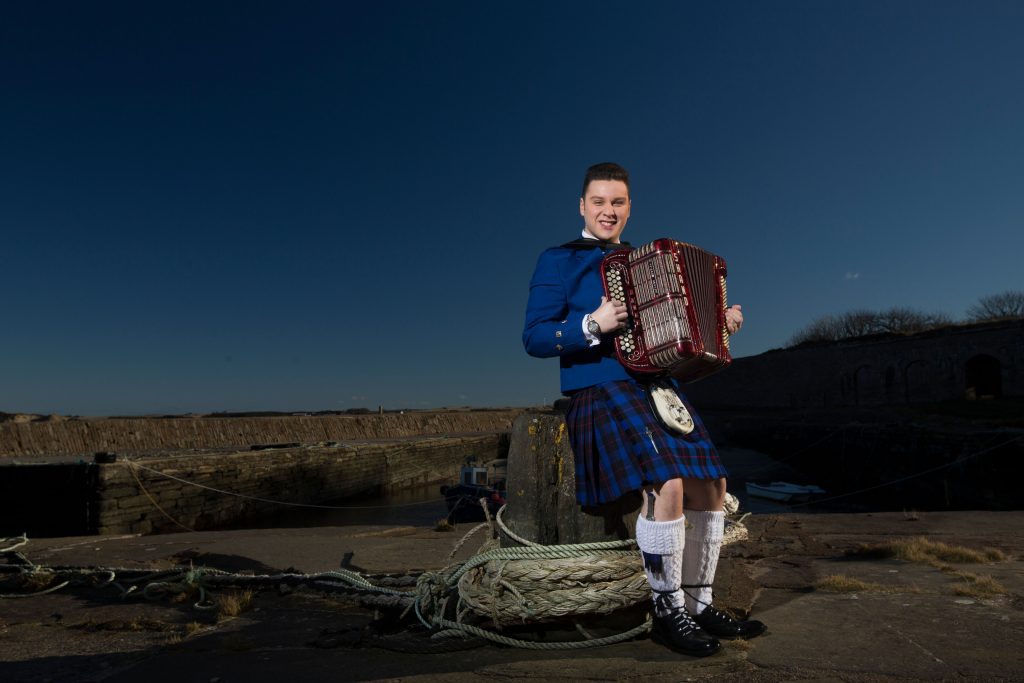 The critically acclaimed, award winning accordionist Brandon McPhee embarks on his Scottish New Year tour throughout February 2022, and he will be preforming in Langholm, 18th of February at the Buccleuch Centre.

It is just over fifteen years since the award winning, critically acclaimed Brandon McPhee ventured his first notes on the button box accordion sitting on his grandad Donald’s knee. A good listener and keen pupil, Brandon was soon playing “The Dark Island” competently, a waltz which remains one of his favourites, and globally one of his most requested tunes.

In February 2022, Brandon will bring his band together for his latest Scottish tour with The Brandon McPhee Band, featuring highly regarded musicians who have many years of experience in the music industry.

Brandon’s passion and dedication has seen the release of 23 recordings to which he adds his latest album, the November 2021 release of “Heedrum Hodrum” on Pan Records, which features a variety of Scottish ‘Folk’ songs and Scottish tunes in a contemporary style. It also features two of Brandon’s own compositions which are new Scottish melodies.

“In this album”, Brandon states, “I have chosen a variety of songs to which I have written my own arrangements, to give them a modern feel that hopefully would grab the attention of people who don’t listen to music of Scottish Culture, and the idea for the title of the album came from being at concerts over the years, were some members of the audience said to me ‘ I just love your Heedrum Hodrum music’. Which always made me laugh, it’s actually catchy I thought.’

Within a year of taking up the button accordion Brandon amassed his collection of competition trophies, beginning at the 2007 Caithness Music Festival and followed by a variety of junior, then senior national successes, culminating in winning the All Scotland Senior Traditional Accordion Solo Championship in 2014. Since then Brandon has focussed on developing his recording and performing career.

A decade from his first few notes, Brandon has achieved phenomenal success both as a champion accordionist and country vocalist. He has a large and growing international following. Over 183,000 people have listened to “The Dark Island” on Youtube.com while “Brandon McPhee – reel playing” set has been viewed by over 186, 000. A competition set (High Level Hornpipe, Jean’s Reel, President Garfield) has topped that with over 329,000 views and nearly 8,800 shares on Facebook, in addition to his version of (Give my love to Rose) approaching half a million views on “All Things Country”, and 369,000 on Hot Country Tv.

Brandon has firmly established himself on the Scottish music alumni with a growing catalogue of both Traditional Scottish and Country Music Albums released through Pan Records. His cover of the Billy Ray Cyrus song “Stand” reached No.22 in the European Country Music Chart. He has had numerous TV appearances in Britain, Ireland and America and presents a weekly show, Caithness Music TV on Sky, Freesat and regionally on Freeview. He has performed privately for Prince Charles and at The Scottish Parliament and more recently played for Prince Charles in Buckingham Palace; when the Prince was forced to remark: “I don’t know how you move your fingers so fast. It’s quite incredible”. To date Brandon has performed with Prince Charles at 8 private functions.

A Flying Scotsman, you may think, but Brandon’s success has been well-earned. Such is his dedication he rehearses at least 5 hours daily (that’s over 200,000 hours of practice so far – and counting!) His goal – simply, to entertain and to be the best he can be.

Pan Record formed in 1990 is a Scottish independent record label based near Wick, in Caithness, Scotland. Pan Records specialise in recording Scottish Musicians and singers including local talent. The first artistes on the label was Manson Grant and the Dynamos.