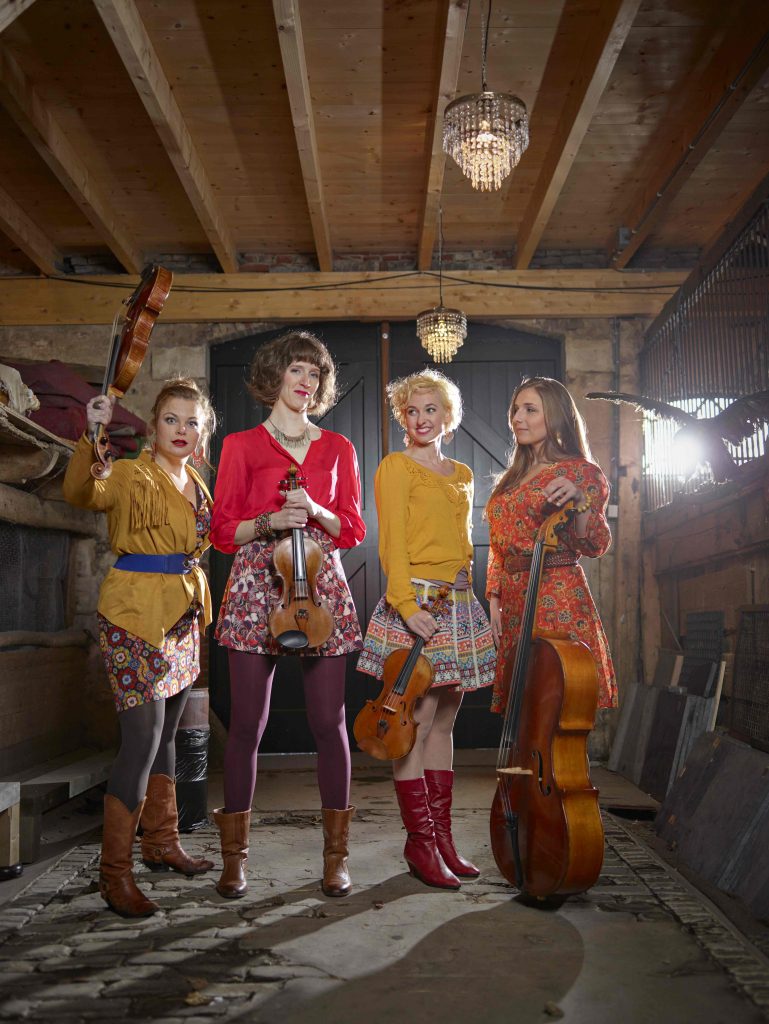 Many strings to their bows

Energetic performances, wide-ranging repertoires and shows with a twist.
This is what to expect from Amsterdam-based all-female string ensemble the Ragazze Quartet who come to venues across the region in November as part of the Absolute Classics concert series.
The Dutch/British classically-trained group of talented musicians are famed for their fascinating repertoire and youthful humour as well as their passion for cross-disciplinary collaboration and unusual performance situations.
Their versatility in particular is said to be “exceptional within the world of chamber music.”
This exciting ensemble collaborates with and performs alongside composers, musicians and artists working in a variety of disciplines and genres.
While grounded firmly in the classical music tradition, Ragazze is always in search of the ultimate cross-over, where the different disciplines are approached as equals, complementing and elevating one another.
The quartet comprises Rosa Arnold, violin; Jeanita Vriens, violin; Annemijn Bergkotte, viola; and Kirsten Jenson, cello, and are all graduates of the Dutch String Quartet Academy (NSKA).
They have toured Nepal, Indonesia and the USA and have performed in all the major Dutch concert halls, including Het Concertgebouw, and have given chamber concerts at venues across the world.
Their two albums, Česko and Vivere, were released on the award-winning Channel Classics to high acclaim.
According to the Guardian: “The playing of the wittily named all-female Ragazze Quartet is fresh, light in texture, nimble and just occasionally a little ragged, but always spirited.”
This month, the quartet played at a special meeting of the Dutch Parliament for the celebration of 200 years of the Staten Generaal in the Netherlands. The audience included a few former ministers and the King himself. The performance was broadcast live on national television.
On Thursday, 19 November, at the Buccleuch Centre, Langholm; and at the Cally Palace, Gatehouse of Fleet, on Saturday, 21 November, Ragazze will perform their highly acclaimed programme, Beethoven Mania, when the quartet will showcase Beethoven’s development as a composer. From his early quartets – still in the classical style – via the stormy Serioso to his extensive opus 132, where, despite his long-standing deafness, the composer’s musical fantasy took him further than ever before.
The music of Dvorak will feature in the performances at The CatStrand, New Galloway, on Friday, 20 November, and the Buccleuch and Queensberry Arms Hotel, Thornhill, on Sunday, 22 November.
Tickets, times and further information visit www.absoluteclasssics.co.uk