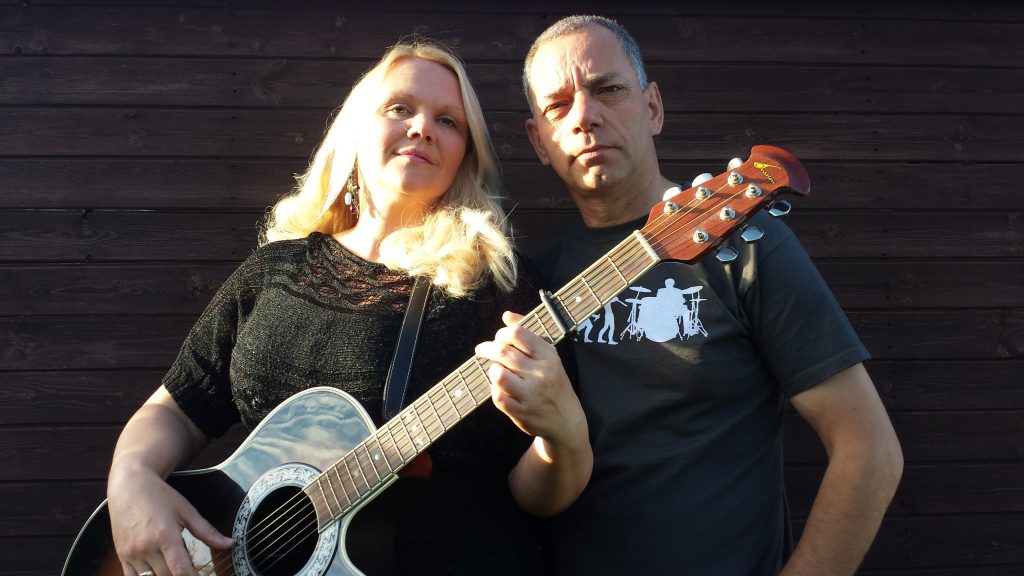 Popular Glasgow-based duo 50 Shades of Blue return to A’ the Airts next Friday for another entertaining evening of quality musicianship ranging across the blues spectrum taking in folk, bluegrass, country and pop. 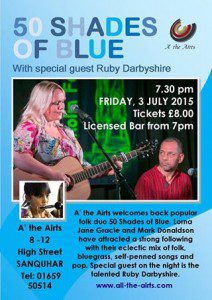 The duo comprises East Kilbride’s Lorna-Jane Gracie and Mark Donaldson from Govan who got together in 2013 when they gave their first live performance at the Glenfarg Folk Feast songwriting competition.
Since then, Lorna-Jane and Mark as 50 Shades of Blue have gone on to win a number of awards; appeared in folk clubs and festivals all over Scotland; and supported the likes of Sean Gray (of the Paul Mckenna Band), Kristan Harvey, Ivan Drever, Chris While and Julie Matthews.
Last year they entertained a 40,000-strong crowd at the opening ceremony of Glasgow’s Commonwealth Games.
Lorna-Jane plays guitar, sings, writes and arranges all of the music while Mark sings and adds his own unique style of percussion to create an exciting, dynamic sound.
Their style of music has been described as eclectic and dynamic as Lorna-Jane’s songwriting skills take the listener on a magical journey through the rolling hills of Dumfriesshire, to the tumble weed towns in the Deep South.
Mark is an accomplished percussionist who had been playing since the age of 15. He has performed in pipe bands, ceilidh bans, wedding bands and has been described as “a one man percussion band.” As well as playing a full drum kit, he plays the cajon, bodhran, washboard, spoons, djembe and bongos
50 Shades of Blue return to A’ the Airts community arts centre in Sanquhar on Friday, 3 July.
Joining them on the evening will be the multi-talented nine-year-old busking sensation Ruby Darbyshire who can sing, play the mouth organ, strum a ukulele and put a smile on everyone’s faces all at the same time.