A HOT BLAST AND A COLD WIND WITH A WALK TO NEILSON’S MONUMENT , RINGFORD

Recently  Team DGWGO and friends visited the Neilson monument , that towers above the Village of Ringford in the Stewartry of Dumfries and Galloway .

James Beaumont Neilson (June 22, 1792 – January 18, 1865) was a Scottish inventor whose hot-blast process greatly increased the efficiency of smelting iron.Neilson retired from Glasgow Gasworks in 1847. He bought an estate on Bute and then Later he bought an estate at Queenshill,Ringford near Kirkcudbright. This is where he lived his final years , he died in 1865 .His son, Walter Montgomerie Neilson, erected this monument to his memory there in 1883.

The Monument is now a very popular place to walk to due to its amazing views , Although the walk is not quite as well pathed or signposted as we had hoped . Dogs must always be kept on a lead due to the path going through open countryside and livestock fields . It only took us about 30 minutes to walk to the top , with 2 dogs and 2 children under the age of 8 with us . 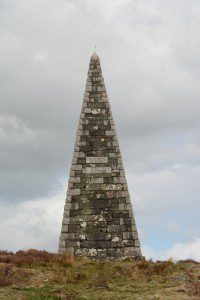 Once we reached the summit where the monument stands   we could see right over the hills in the south of the Stewartry and across to the northern Lake district . We could see a great view of Threave Castle below us , Castle Douglas and beyond in the east right across to the hills on the far side of Dumfries , then westwards we could see out over Kirkcudbright , Over Ross Island and across to Wigtownshire , Although while at the top we had to take shelter due to a heavy hail storm , and visibility did become poor , but by the time we got back to the bottom of the hill at Barstobrick Visitor Centre the sun was shining and it was time for a slice of cake and a hot chocolate at the Cafe there ! ‪#‎brilliantmoments‬

Over All Team DGWGO would like to give this walk 8 out of 10 , it had really great access and parking , a Dog friendly cafe to warm up at and grab a light bite at a cheap price , Great views on a Clear day , and not too strenuous to walk. Although the path in wet weather would be muddy in places and there were plenty of Cow pats on it to and the sign posting was poor for the walk itself !